Share All sharing options for: Palmer is only Bengals player ranked in top-ten in Madden '10 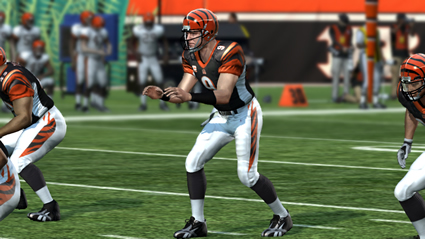 ESPN released ranked players, based on positions, in a top-ten format in anticipation for EA Sports' August 14 release of Madden '10. Let's see. Wide receivers in the top-ten? Nope. Tight Ends in the top-ten? Nope. Defense? Nope. Running backs? Nope. The lone top-ten Bengals player is Carson Palmer, who ranks eighth. Shutdown Corner is surprised by Palmer's ranking, drunkenly writing, "there's no doubting that, when healthy and on a good team, Palmer has the talent to be on the best quarterbacks in the league. He'll be neither of those things in 2009."

A concern about Palmer: Yes, Palmer is fully healed. Yes, Palmer looks good during OTAs. Yes, Palmer is coming back. The concern that gnaws at the back of my head, however, is that Palmer was all these things during the 2008 offseason. Quickly, we saw the offensive line breaking down and the injury suffered that eventually ended Palmer's season, wasn't from a guy that came from the front-seven. Blitzing cornerback Corey Webster got a hand on Palmer's throwing arm, in the middle of a pass, that caused the injury to Palmer. The offensive line is better, however, it's very unproven. Andrew Whitworth and Bobbie Williams are known commodities and we have a basic idea about Nate Livings. But Andre Smith. Kyle Cook. Who knows?

Anyway, I'm not waking up in a sweat during a ferocious lightening storm or anything. It's just there. In the back of my head. Even though he's healthy and ready to go, there's always that thought that Palmer gets hurt again, and our season goes down the tubes.

Defensive Coordinator Mike Zimmer and Defensive Line coach Jay Hayes have been working on the team's pass rush during OTAs.

Not only is Ben Utecht a Christian music artist, he's also got a recipe for Teriyaki Steak and Brown Rice. If there's a story about a Bengals player out there, about anything, I'll find it.

The Bengals believe 2007 first-round pick Leon Hall has the ability to be a star, and he also has the intelligence, determination and leadership skills. Last year Hall was left on an island with the opponent's best receiver more often than not, and the results were mixed. If the Bengals can deliver more pass rush and give him some support from other defensive backs, Hall should blossom.

Andrew Whitworth made the "runners-up" list of the NFL's nastiest players.