Thank You For Carson Palmer

Share All sharing options for: Thank You For Carson Palmer 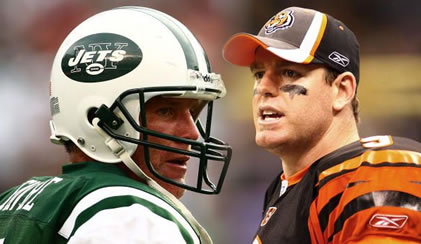 This post might not be what you think it is and it may very well be more suited for the Fan Posts section, but something occurred to me while we've been going back in time, to the beginning of last year's Summer of Favre: I'm glad the Bengals aren't in need of a quarterback, because I don't think I could take it if Brett Favre was somehow interested in playing in Cincinnati.

Now, I'm not going to go into some violent evisceration of Farve, ala Big Daddy Drew -- I'm just not that eloquent with cuss words -- but the fact remains:  Favre's repetitive attention whore/diva act makes me happy the Bengals have Carson Palmer.

Dude, if you want to play, play.  Just don't have televised conversations with Ed Werder saying how you are "unequivocally" done.

Because of your premature utterances about your career, you've become a laughing stock, and believe me, as fans of the Bengals franchise, we can recognize a laughing stock as well as any fanbase.

Will the Vikings be better than the Bengals if/when Favre signs?  Probably, but I take solace in the fact that Bengals fans won't be sitting there nervously waiting for our quarterback's first four interception game -- one that will surely come at a most inopportune time -- as he predictably returns to the bad habits that help stain an otherwise impressive career.

Now, if the Bengals can just protect Palmer's face for an entire season, he might be able to fulfill some of that endless potential he's so well known for.