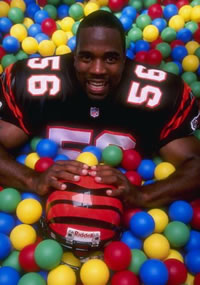 One guy they hired is former Cincinnati Bengals linebacker Brian Simmons, who "will serve as the team’s northeast regional scout." Simmons, selected by the Bengals 17th overall in the 1998 NFL Draft, played nine seasons in Cincinnati before the team cut him in February 2007, which saved the Bengals $2 million against the cap. The team later signed Ed Hartwell to presumably replace Simmons. The Bengals cut Hartwell several months later on final cut-down day (aka biggest firing of single business day).

Simmons went on to sign with the New Orleans Saints, starting three games and recording only 27 tackles, according to NFL.com. He didn't play in 2008.

By my count, the Jaguars increase their scouting department to twelve. They even have their own section on the Jaguars website. The Bengals, on the other hand, have one full-time scout, three consultants and two directors (football operations and player personnel).