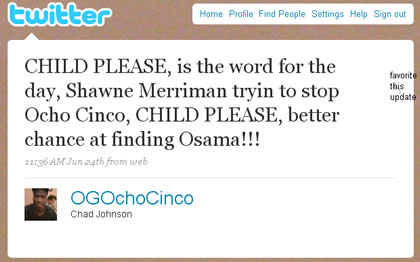 One thing's for certain, Chad has taken to the Twitter craze like a fish to water.  He loves his fans, especially the female followers and he apparently loves the immediacy his Tweet habits offer -- something his "train of thought" posts and responses indicate. While he may have the best follow-to-followers ratio in the world, to his credit, Chad does correspond with people, unlike a lot of other celebrity profiles out there.

Like any good innovator, he's also found another use for the flavor-of-the-month of social media site:  trash-talking his opponents.  Just ask Shawne Merriman.

Before I get into all that, I must say this is the Chad I prefer. Don't get me wrong, all that "Ocho" stuff is awfully silly, but when he isn't worrying about being traded or his next celebration (me stuff) and focuses on taking it to his opponent, he's a much more productive player -- remember the list?

It all started with this Tweet from Chad, informing Merriman it was his ass when the Chargers and Bengals hook up on December 20th in San Diego (Week 15).  From there, it was, as they say, ON.  Merriman responded to Chad's barb, which, led to a nice little war of words.  In fact, the two didn't limit their responses to Twitter's service.  Amazingly enough, the verbal sparring session moved to another social media favorite, online video.

Merriman recorded a 12-second trash-talk greeting for Chad.  Oddly enough, one of the hosts on Kansas City's 610 AM station -- this guy -- called one of Merriman's statements a "death threat."  Check it out for yourself and see what you think:

Naturally, Ocho couldn't take a slight like this silently, so he decided he'd use a Twitter video service to respond.

Good times, indeed.  Although, I will say Ocho wasn't too happy with Merriman's "wring your neck" utterance either, so maybe Wright was on to something.  Oh, and in light of all this, it looks like locker-room material may be a thing of the past -- or at least the medium through which it usually travels.  Instead of waiting on ESPN and local coverage, these athletes are depending more and more on the social Internet to carry their message.

I can see it now: instead of dry-erase boards with quotes on them, locker-rooms will soon feature laptops with real-time updates of opponents' Twitter, Facebook and YouTube accounts.