Share All sharing options for: Ocho's Still in LA 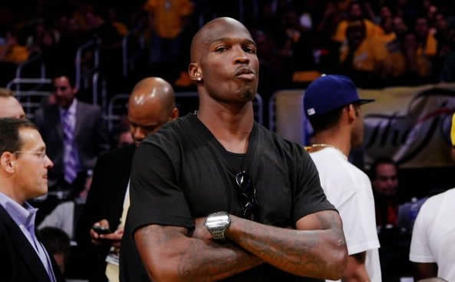 Yeah, he said he's going to be in the June minicamp, and he says that he's been humbled by last year and he owes the fans and his teammates better -- I believe him, for what it's worth -- but one thing's for sure: Chad loves him some NBA Finals.  From the looks of it, he's also a big Lakers fan because our last couple of Ocho sightings have been at the Staples Center, much like the picture I'm leading with from last night's Game 1.

Speaking of minicamps and such, where do we stand on Chad's words of contrition?

"I not only owe Cincinnati, but my coaches, my players, my team and my fans to get myself back in rare form before I even hit the field again," Ochocinco said. "Because last year was very humbling to me. It was an embarrassment. Not only to myself, but to the city and team. Before I even go back I just want to be in unbelievable form before I touch the green grass."

Do we take him at his word or is he just being political? Furthermore, and regardless if he backed off them a day or so later, did Palmer's criticisms sting Ocho into finding himself?