As Usual, Chris Crocker Nails It

Share All sharing options for: As Usual, Chris Crocker Nails It 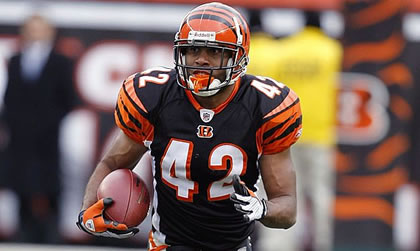 Well, we are in Day Two of the post Brandon-Stokley-horse-****-miracle-reception-deflection era, and I have to say, I'm still bitter.  Very bitter, in fact.  That's why when I read things like Chris Crocker's reaction to said deflection/reception, I can't help but agree in an animated manner.  Although, I don't think I have quite the amount of emotions tied up in it like Crocker does:

Safety Chris Crocker was a little more blunt about the outcome when he said: "That play was a miracle. I'm not going to give them any credit and they didn't do anything to deserve that play. We played our butts off."

Is there a little bit of sore loser on display there? Perhaps, but put yourself in Crocker's shoes.  For the better part of three hours he and his teammates absolutely buried the Broncos.  Next, his offense finally decides it would offer some support by scoring a touchdown.

Now he's feeling like his defensive efforts are paying off, only to watch Brandon Stokley take those ideas and urinate all over them, courtesy of doing nothing more than being in the right place at the right time.

If you take pride in what you do, a game-turning play like that would have to hurt to the point you feel like your opponent deserves no credit for their burst of fluke luck.  With that in mind, I can't imagine preparing for the Green Bay Packers is going to be easy, but if the Bengals and Crocker don't have short memories, Aaron Rodgers might throw for 400 yards against them.