Share All sharing options for: Chad Says He'll Lambeau Leap if He Scores 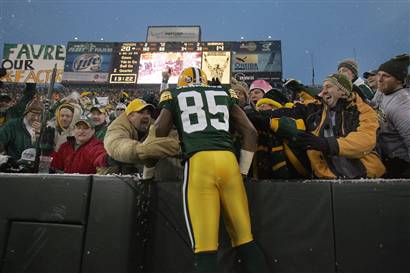 This little nugget of information is making it's way around the Twittersphere right now, just in time to get you pumped up for the Green Bay Packers.  If he scores on Sunday, Chad Ochocinco says he's going to do the Lambeau Leap, and that it won't be a disrespectful display, rather, he'd like Packers fans to embrace him.  While this will  be viewed by some as a continuation of Ocho's incessant demand for attention, I'm honestly starting to believe he does these things with honest intentions.

That is, he honestly doesn't see anything wrong with embracing fans, and some of the traditions they have when he travels to opposing stadiums.  The Cleveland Browns leap from two seasons ago comes to mind.

Considering Pack fans don't hold the a Favre-like level of animosity towards Chad, I'd say he's safe.  However, if it's a game-winning touchdown (I'm so tempted to say "Yeah, right" here.  Damn you, Brandon Stokley.), I'd probably avoid it.  Even in Green Bay.