Do We Care About Planted Fans?

Share All sharing options for: Do We Care About Planted Fans? 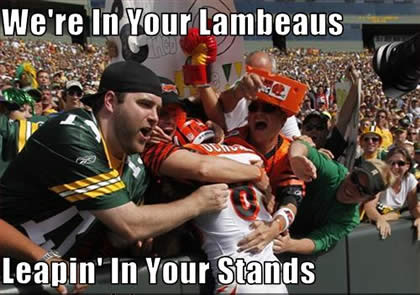 I'm curious, does the fact that Chad Ochocinco bought the tickets for the Bengals fans who greeted him during his Lambeau Leap somehow lessen the fact that he still did it?  Apparently, to folks like MJD at Shutdown Corner and Dashiell over at Deadspin, it does.  I'm guessing the fact Ocho "planted" those fans somehow takes away from his moment.  Never mind the fact that three people wouldn't be able to hold off, well, the thousands of Packers fans if they decided to reject Ocho's Leap.

In fact, if he had wanted to, Mr. Middle Finger could've pushed Chad off of the padded support.  Instead, he opted for sharing his apparent disdain with the CBS cameras.

So, where do we stand?  Does the fact that Ocho bought tickets for the fans you see in the lead image somehow diminish his touchdown and the requisite celebration that followed?  Further, would national bloggers prefer a player getting attacked instead of being welcomed?

Yeah, so what if he bought those tickets?  He still had to score -- in the right end zone, mind you -- to be able to complete both parts of the "agreement."  While some might think it's somehow disingenuous on Chad's part, I call it smart planning.