Marvin Lewis through the Years. Do you ever notice that when Presidents leave the White House, that their hair is completely frosted over with age and an unknown level of endured stress? The left picture shows when Lewis was hired and on the right, Lewis is at a press conference when he and Steve Sabol announced that HBO's Hard Knocks would feature the Cincinnati Bengals. 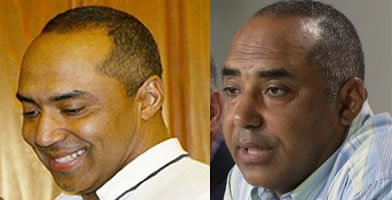 WhoDeyFans really liked the defense against the Steelers. They liked even more that the crowd at Paul Brown Stadium was "a sea of black and orange."

Eric McMackin likes how the Bengals stuck to their phrase: Fight Back!

John Thornton liked that the Bengals had to work hard for their win against the Steelers. However, he still believes the AFC North is up for grabs.

Chick Ludwig calls it "The Drive".

Andre Caldwell is focusing on the Browns as a team, rather than their record. "They’re feeling like we did last year. They’re backed into a corner and are going to try and fight their way out."

Rey Maualuga was embarrassed for coming back into the game because he was carted out earlier. "It sort of scared me because I felt something pop. I said, I’m still all right, I’m still able to move. I just sucked it up and told the docs that I was fine."

Geoff Hobson writes that this Bengals squad is mentally tough; a knock on the previous Marvin Lewis squads.

Speaking of Hobson, he forces you to put on the "remember when" cap.

Remember the second week of the 2007 season?

The Bengals were coming off a huge win at Paul Brown Stadium to open the season in a Monday nighter, a 27-20 victory over AFC North rival Baltimore in what remains one of their most intense and hard-hitting games under Lewis fueled by a last-minute goal-line stand.

Meanwhile that same weekend, the Browns were obliterated by Pittsburgh, 34-7, and were immersed in a quarterback quagmire as they prepared for the Bengals by trading Opening Day quarterback Charlie Frye to Seattle two days after the game and naming Derek Anderson to his fourth NFL start.

Anderson then stunned the Bengals with five touchdown passes and 328 yards in Cleveland’s shocking 51-45 win that sent the Bengals into a four-game losing streak and basically knocked them out of contention.

An unlikely cast of players are leading the Bengals to success.