I Approve of This (Rey Maualuga)

Share All sharing options for: I Approve of This (Rey Maualuga) 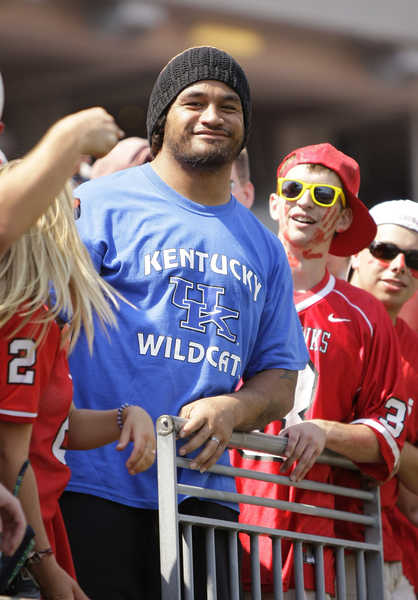 Here's a little break from all that "football" talk Josh and crew have been inundating us with ;)...

The rookie linebacker we love to love has given me another reason to root for him. This picture was taken at Saturday's Kentucky/Miami of Ohio football game, played at Paul Brown Stadium. Now obviously, Maualuga is a USC Trojan through-and-through, but the fact he even acknowledges UK gives me pause, as well as a reason to celebrate.  Of course, he was probably just giving the RedHawk fans a hard time.

A big hat-tip to KentuckySportsRadio.com for the find (via KentuckySports.com) -- Oh, according to the comments, Rey enjoyed the game.  A lot:

I was in the Miami section. He came over in a Miami jersey and cheered for Miami, then took it off to reveal the UK shirt. He drank copious amounts of alcohol with both parties.

If poster Glorious is being forthright, it sounds like Maualuga would be a blast to hang out with.  Oh yeah, Carson Palmer was there, too.