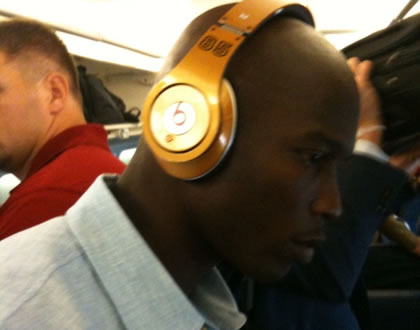 For those of you who thought Chad was just going to walk away quietly from the whole Twitter phenomenon, allow me to evoke my inner Lee Corso:

Not So Fast, My Friend!

According to James Walker, ESPN's AFC North Blogger, Chad Ochocinco has found some loopholes in the NFL's Twitter policy -- surprise, surprise -- and plans on exploiting them on Sunday against the Denver Broncos.  How, exactly, is unknown at this time.  You can chalk that up to the subterfuge method Chad has been known to use in the past, specifically concerning his Christmas touchdown celebration that was stopped by the referees a couple of seasons ago.

And yes, those are 14-karat gold personalized earphones on his head, via his rather enjoyable Twitpic profile.

One last thing:  Since we already know Chad is planning on doing something Twitter-related this weekend, does anyone want to take a guess at how much the impending fine will be?