Captain Of The Tailgate: Introducing The Kirkendall BBQ Ribs Spectacular

Share All sharing options for: Captain Of The Tailgate: Introducing The Kirkendall BBQ Ribs Spectacular

A few weeks ago, we talked about having finger food in the form of fried chicken fingers baked in BBQ sauce causing an epic crowd to smell the delicious treats of heavenly goodness.

However, finger food sometimes doesn't cut it. When you're outside, throwing a football and drinking adult beverages from the moment the sun breaks the horizon, you tend to develop a hunger that's not fulfilled with finger foods. You need something meatier, something bigger, more filling.

Since the process is time consuming, and will require some amendments to suit your own tastes, this is best done before tailgating. And really, could life be any better than testing different spices and BBQ sauces on a bunch of ribs? Oh, it's just not right? Whatever will I do with this five pound rack of ribs, I ask? Left over heaven. And if you're like me, having a ton of leftovers is nearly as exciting as watching the Bengals actually win a game.

Go to your local grocer (or the backyard, Mr. Lector) grab the biggest rack of ribs you can get your hands on. If you don't have them at home already, grab some pepper, garlic butter and your favorite BBQ sauce. Personally, I like Montgomery Inn's BBQ or any honey BBQ flavor. Any BBQ sauce will do, so grab your favorite.

When you get home, preheat the oven to 250 degrees. Grab a rectangular casserole dish and line it with aluminum foil where the north and south endzones of the dish has excessive foil. Break out the ribs from the package and run it under water to clean off left over blood (this doesn't not apply to friendly local vampires). Gently lower the ribs in the middle of the casserole dish as if putting your baby to bed. Spread some pepper around the surface, but not a lot. This, of course, can be changed based on your own tastes. Take the garlic powder and, depending on your taste, dump as much as you want. Personally, I only dump just enough to have a garlic hint, but not too much for the overall garlic taste -- this takes some experimentation but it's worth it.

Take the excess aluminum foil, cover the ribs and place the casserole dish into the oven and let your ribs (not actually your ribs, but the ribs you're making) cook for three and a half hours. Play a game of Madden, made love to your woman (or vice versa on the off-chance that a female is reading this), write an article about the Bengals and then play catch with the boys. Once your 3.5 hours have expired, take the ribs out and coat them using an entire bottle of BBQ sauce on both sides of the ribs. If you have a brush, use it to even the coating. If you have tongs, use them to flip the ribs over to cover both sides.

Once you've finished with the BBQ spread, put the ribs back in the casserole dish and leave the foil butterflied out, so that the ribs are not covered and the BBQ bakes into the ribs. Let them cook for an additional hour and a half. Once they are finished, they'll look like this. 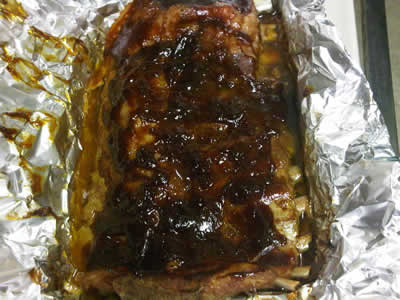 Even though you're likely cooking them a day in advance, ribs are a good meal to reheat. If you have the time, place them back in the oven the morning of the game and let them heat slowly, or throughout the entire time you have to prepare. When you're ready to eat them, the meat will literally fall off the bone. Ribs can be used for finger foods, but truly, no one can just eat a few. You eat ribs until you're stuffed. That's just the way the universe works.