Share All sharing options for: Matt Jones for Tight End? 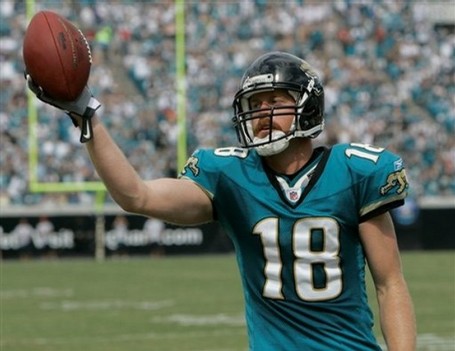 With his size (6-6, 220), there are some rumors going around that Matt Jones might be playing tight end when the Bengals kick off the 2010/11 season.  While he's not known as a blocker, if Jones decides to give a damn, he has the talent to be a Ben Utecht/Jay Novacek-style of tight end.

The question is, is Jones motivated enough to be effective in that area?

The reason I ask is because when that not-very-flattering report about Jones' workout for the Bengals broke, PFT speculated Bengals coaches were trying to motivate Jones by criticizing him to Yahoo Sports.  Of course, they also said, "It's more likely that the sources are fighting back against a move orchestrated by owner/G.M. Mike Brown."

Whatever the case, it's up to Jones to decide whether or not he wants to be a contributing member of this team, be it at receiver or tight end.  Considering the amount of talent in the upcoming NFL Draft at both tight end and receiver, I'm hoping the Bengals wouldn't suffer an unmotivated Jones for very long.

On the other hand, perhaps Jones can channel such fine folks like Dhani Jones, Cedric Benson and Tank Johnson and use the Bengals to revitalize his career.  It's all up to him.