Leading off the inaugural edition of the Cincy Jungle Mock Draft is member JohnnyK, selecting for the St. Louis Rams. His explanation for the pick is after the jump. Thank you for your participation JohnnyK. 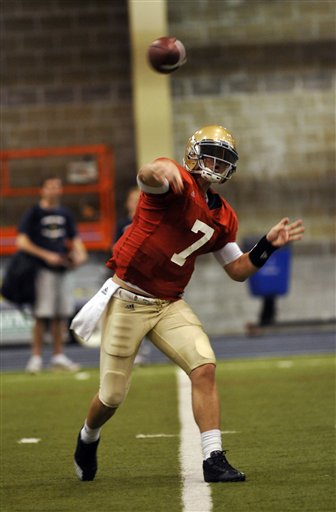 Oh the St. Louis Rams. What can I say that hasn’t already been said 100 times already? The team is in shambles and rebuilding. The team last year finished with a dismal 1-15 record, earning themselves the first overall pick in the 2010 draft. As with any rebuilding process for an NFL team, a top-flight quarterback is needed and the Rams are no different. Marc Bulger may have had a good career but is not getting any younger. A look at the team statistical ranks show that the Rams are indeed in dire need of new blood at the quarterback position.

So the logical choice for the Rams is to draft a quarterback. The consensus top two QBs are Sam Bradford and Jimmy Clausen. I certainly did not enjoy this selection. I look at the two and I see a lot of similarities. It seems that most of the mock draft world feels that Bradford is the better QB for the Rams. I however am going to have to disagree and select Jimmy Clausen as the number one overall choice.

Clausen comes from a pro style offense which, in my mind, puts him ahead of Bradford. He has had three years to learn how to take a snap from center. Three years to read a defense. Three years to mature and improve. He certainly did not excel his freshman year but you can see a steady maturation of his skills over time. He was coached by Charlie Weis and because of this, there is a steady increase in skill over the years. This tells me that he is a very coachable player.

Clausen did not have the benefit of an excellent team around him while at Notre Dame. Injuries plagued his teams, both to the offensive line and wide receivers. The offensive line was nothing short of offensive. The line gave up 58 sacks in 2007, a school record. He also did not benefit from a putrid Notre Dame running game.

Bradford’s collegiate experience is the opposite. He comes from a college spread offense where he lined up in shotgun the majority of the time. The Sooners had an excellent running game and a much better offensive line. In a team sport like football, it is tough to measure how much Bradford benefited from the players around him and how he can adjust to a bad NFL team like the Rams.

Given these facts, I think Clausen will be a better fit in St. Louis. He will certainly be banged up due to a poor offensive line (the Rams ranked 26th in sacks allowed and 30th in QB hits). He can make a more immediate impact after he is drafted, due to the style offense played for the Irish (especially a concern if an older Bulger keeps taking hits). Because there is not a lot of guess work with Clausen, the number one pick should go to the sure thing when picking a franchise quarterback.

I certainly know that many, many people like Sam Bradford. And I’m not saying I don’t. But I believe Jimmy Clausen is a better fit for the St. Louis Rams and that is why he is my selection.