If the Bengals elect to draft a guard, why not Jon Asamoah in the second round?

Share All sharing options for: If the Bengals elect to draft a guard, why not Jon Asamoah in the second round?

It's generally thought Mike Iupati will be the first guard taken in the NFL Draft; most likely in the first round. Now, the Bengals do not necessarily have a desperate need to draft a guard this year, especially when Bobbie Williams finally signs a contract and returns to Cincinnati. But if the Bengals elect to find a better solution than Nate Livings and Evan Mathis, there's a chance that Cincinnati could go after Illinois guard Jon Asamoah in the second round.

Mocking the Draft ranks Asamoah as the eighth best offensive guard in the draft:

In the Illinois spread offense, Asamoah has become a solid telephone booth pass blocker. He has enough agility to handle pass rushers. He has good footwork, which helps him keep in front of defenders. However, he plays more like a tackle than a guard and doesn't explode off the snap into defenders. He's not a real great drive blocker and needs to get much stronger throughout his frame.

ESPN ranks him as the third best guard in the draft. 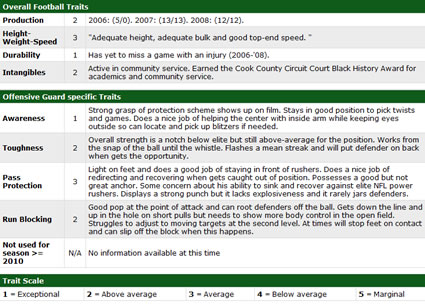 It's questionable if the Bengals view offensive guard as a position of need once the team signs Williams back. All indications are that the team viewed the guard as a priority simply in response to Williams being an unrestricted free agent. Once word was out that the team and Williams wanted to get a deal done and it was a matter of getting him signed, we figured that acquiring a starting guard through free agency or the NFL Draft, was a lessened priority.

However, if the team does look at drafting a guard, then Asamoah seems to be a good fit. A strong character guy that's versatile enough to play tackle also. And we know how the Bengals value versatility on the line.