The fourth pick in the inaugural edition of the Cincy Jungle Mock Draft is brought to us by member jim0ijk, selecting for the Washington Redskins. His explanation for the pick is after the jump. Thank you for your participation jim0ijk.

With the fourth pick in the 2010 Cincy Jungle Mock Draft, the Washington Redskins select... 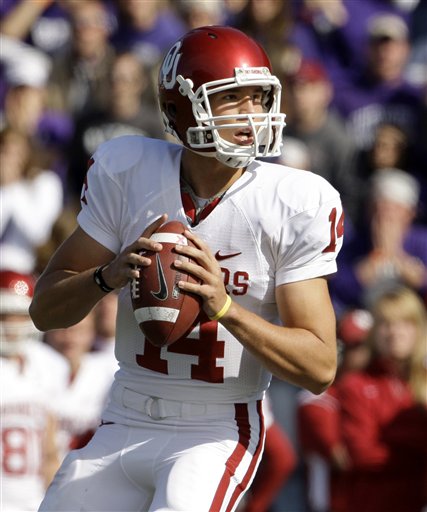 The Redskins 2 biggest needs are Quarterback and Left Tackle, either of which could be selected here. They also need a Guard, RB and Inside Linebacker, but there are none worth drafting this high. This selection is a great match-up of need and best player available.

The Redskins were pleased that they had their choice of left tackles at the 4 spot and were prepared to select Russell Okung; however they could not pass on Bradford. Mike Shanahan would like to get a Quarterback who has franchise potential but does not have to start right away. Bradford may not be fully healed this year but with a year on the bench, getting reps every week as the number two QB, he will be able to heal more fully and learn the offense, while Jason Campbell starts one more year.

Another factor is that there is more separation between Bradford and the next available quarterback than there is between Okung and the Tackles that should be available when the Redskins pick in the second round. Charles Brown is a raw talent, still gaining weight and learning the position, but he has the talent and athleticism to become a solid left tackle, similar to Jason Peters. Jared Veldheer or Rodger Saffold could either be selected if Brown were gone, both have a lot of upside, even if they don't last as NFL left tackles for their entire careers.