Share All sharing options for: Cedric Benson Arrested and Charged With Assault That Took Place A Month Ago

According to multiple reports, Bengals running back Cedric Benson was arrested for an alleged May 30 assault in Austin, Texas early Tuesday morning after "an incident last month at Annie’s West at 706 West Sixth Street, where officials said he punched a bar employee in the face." According to Statesman.com's Tom Plohetski and Kevin Robbins:

The 27-year-old current running back for the Cincinnati Bengals had been involved in an altercation at the establishment and was being escorted out when he punched an employee, according to an arrest affidavit.

The affidavit said the May 30 incident began at 1:50 a.m. when a fight began between Benson and an unknown person inside the bar. Club staff separated them, at which time Benson shoved a manager “in an attempt to continue the fight he was previously engaged in,” the affidavit said.

The affidavit said Benson spit blood from his injured lip at a bar employee.

“Benson refused, and was escorted out of the bar,” the affidavit said.

Outside, the affidavit said employees tried to prevent him from going back in. At that point, he punched “with his right fist to the left side” of an employee’s face, causing the employee to stumble backwards.

Benson has been released after posting bail from the Travis County Jail and faces "up to a year in jail if convicted of the Class A misdemeanor."

Benson and the Bengals are reportedly in the middle of negotiating for a contract extension that, in one report, could have him a Bengals running back through 2013. However, along with the legal issues presented to him now, he'll have to deal with NFL Commissioner Roger Goodell. It would seem very likely that once the legal process works itself out and Benson is found guilty, he could find himself suspended at least four games; possibly as early as the start of the season. Considering that the Bengals are still committed to the run-first offensive philosophy, this could create a serious problem if Benson is suspended at any point in the season.

Though I suppose the one curious thing with all of this is that it's been a month since the alleged assault.

MORE ON BENSON: According to TMZ:

The report continues ... bar employees tried to calm Benson down -- and the NFL star replied, "I don't give a f*ck."

Benson was asked to leave the bar ... but refused ... and had to be physically escorted out by security.

Once outside, Benson allegedly told a bystander, "All these white boys are ganging up on me and kicking me out."

But according to the report, one bouncer heard Benson make the statement and replied, "I'm going to take time out of my busy job to kick you out?"

And if things weren't disgraceful enough, his mug shot is being circulated now thanks to TMZ. 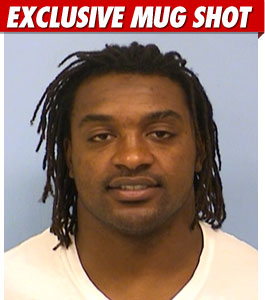