1: a monster that has two heads

2: something from Urban Dictionary that is really shocking

3: a running back duo on an NFL team that makes a defensive coordinator soil himself

That's right. You read it right here. I got this definition from an actual dictionary (that I wrote..... yes, I write fake dictionaries when I'm bored). I am officially going on record to say that the Bengals have in their possession one of the most coveted weapons of any offense. The dreaded two-headed monster running back duo. We knew that Benson was a monster by himself, running full speed down the field in hide and chain mail armor, hitting linebackers and safeties with his massive spiked club (he's an ogre in this article). Now it seams that he has grown a second head named Bernard. The defenses of the AFC North are going to have to start picking up demi-gods via free agency to slay this beast. 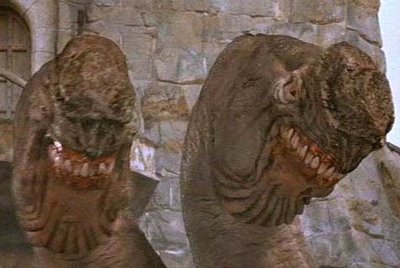 Even Willow would have a hard time taking down this monster.

So far, the Bengals front office is very happy with Scott and are looking to expand his role in the offense.

Running backs coach Jim Anderson said during minicamp that the organization is counting on Scott to be bigger and better than he was last season and will play a bigger role in the offense. That was demonstrated catching the ball out of the backfield against Denver.

Since the Bengals third-down back, Brian Leonard, is injured, there may be room for Scott to make an even bigger impact on offense. On Sunday, against the Broncos, Scott finished with 48 yards receiving which was just two-yards behind the receiving leader Jordan Shipley. Not only could Scott possibly act as a reliever to Benson by taking somewhere around ten carries a game but he could step up to replace Leonard as the third-down back. Scott also likes his chances to make an impact this season.

"The game has slowed down since this is my second year," Scott said. "It’s not as fast as my first year. So I’m just going out there and making the right reads and playing hard. That’s the plan, to try to get me the ball out of the backfield against the linebackers and let me go out there and do my thing. I just have to go out there and take advantage of my opportunity."

With Benson's power and ability to run between the tackles and Scott's speed and ability to catch the ball out of the backfield, the Bengals running game could be even more potent than it was last season. Combine that with a revitalized passing game and a top-five defense and you've got yourself a _______ team (I don't want to jinx anything so you can fill in the blank yourself.