Share All sharing options for: Benson Looking To Be Third Bengals Back to Rush for 100-Yards in an Away Opener

20-5. That's not my ratio of bedrooms to bathrooms in my apartment (it's more like .5-0.... don't ask.... BOX!). That's Carson Palmer's record when he has a running back who rushes over 100-yards. He is 20-5. That's a pretty good record. Cedric Benson wants to add to the left side of that dash mark and he wants to get to it when the Bengals take on the Patriots on Sept. 12. If he succeeds, he would be the seventh Bengals running back to rush over 100-yards in a season opener and on the third Bengals back to rush over 100-yards in an away opener.

"I just want to lock this running game down," he said, but asked if he needs to the ball more, he also said, "I don’t think so, but I definitely want more. Just to get the offensive line going. Everybody going. Not necessarily (more). I feel real good about where I’m at now. I told you last week I could have gone for 100 on Dallas. I don’t come into camp not prepared. I make sure I come in well prepared and ready to go, so that makes getting a feel for things (easier)."

Considering the improvements that the entire offense made, including the offensive line, between the Cowboys game and the Denver game, I don't think that Benson becoming the eighth and third back to reach 100-yards on an away-opener is unrealistic at all. The only way that it would become unrealistic is if the Patriots built and trained a defensive line of robot rhinos and I don't think that's the case. 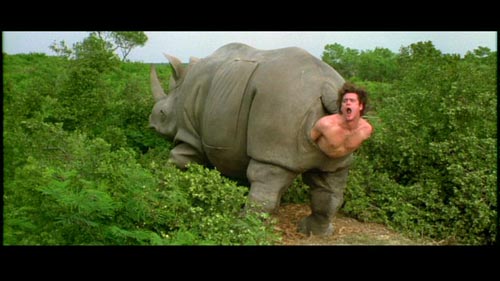 Andrew Whitworth agrees that the Bengals offense has taken steps ahead from the Cowboys game and the Denver game.

"We felt like there were some random things that happened in the Cowboys game and we weren’t really worried about it," Whitworth said. "All we needed to do was fix it and we did. You never jump on the sword in the first preseason game slash scrimmage of camp. It was something we did better and we’ll continue to get better."

Everybody knows that the passing game hinges on the running game and vise-versa. If Benson is busting out 100-yard rushing games, the passing game will open up and when the passing game opens up, the running game will get easier and easier. It's like when somebody punches me in the face a lot, I start to put my hands over my face and that's when they hit me in the stomach (I get beat up a lot). That's what the Bengals offense can do to the opposing defenses in the NFL. Fortunately for the Bengals (and unfortunately for me) it is hard to defend against the rush and pass one-two face-stomach punch.