My Day at Training Camp

Share All sharing options for: My Day at Training Camp

I got up early this morning so I could make the trip down to Georgetown to watch the Bengals practice with a friend. It was a good day. I got to see the Bengals in person for the first time this year and, in my opinion, they looked good. I know it's pre-preseason so it doesn't really matter but there are a few things I noticed that have my hopes up. The first thing I noticed is that it was unbearably hot. I felt like I was going to die just standing off to the side of the field and I wasn't running around with a helmet and shoulder pads on. I don't know how they didn't all die out there today. I guess that's why they make the big bucks and I feel more comfortable writing about how hot it is from the comfort of my central air.

Rey Maualuga didn't practice this morning because he's nursing his hamstring. Michael Johnson played in Maualuga's position, where he has been practicing a lot this off season. He looked good, he is quick around the edge and has the potential to really disrupt the passing game. We all know that Maualuga will be replacing Dhani Jones at middle linebacker eventually, whether it happens this season or not, I don't know. What I do know is, from what I saw today, Michael Johnson will be ready to step up to replace Maualuga at strong side linebacker. 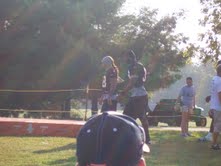 It's a little hard to see but that's Rey Maualuga and Michael Johnson making their way to the field.

For the first time, I saw Tank Johnson up close. I was only about five to ten feet away. He may be the most terrifying man I've ever seen. If he doesn't scare offenses then I don't know what will. A giant spider in a Bengals uniform?

Maualuga seems to have a really good relationship with his coaches, especially with Marvin Lewis who was playfully shoving him when they first got out on the field. Even though he sat out today, he still ran and stretched with the team without limping at all. It looks like there is no reason that he wouldn't be playing on Sunday.

Mike Zimmer is a fan favorite. He was signing autographs before practice ever began. 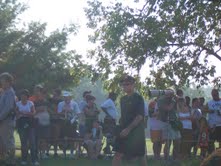 Mike Zimmer heading out on the field after signing autographs.

Overall, the defense looks as good if not better than it was last year. They have the same basic package as last season and they've added some extra awesomeness on top of it. The defense has too good of a foundation and has too much talent to not be a top five defense again this season.

I spent the majority of the time watching the offense today because I wanted to watch Jermaine Gresham and Terrell Owens. Unfortunately, TO didn't practice today. He wore his jersey and some spandex sweatpants (with no shorts on top) but he just walked around the sidelines and talked to coaches. 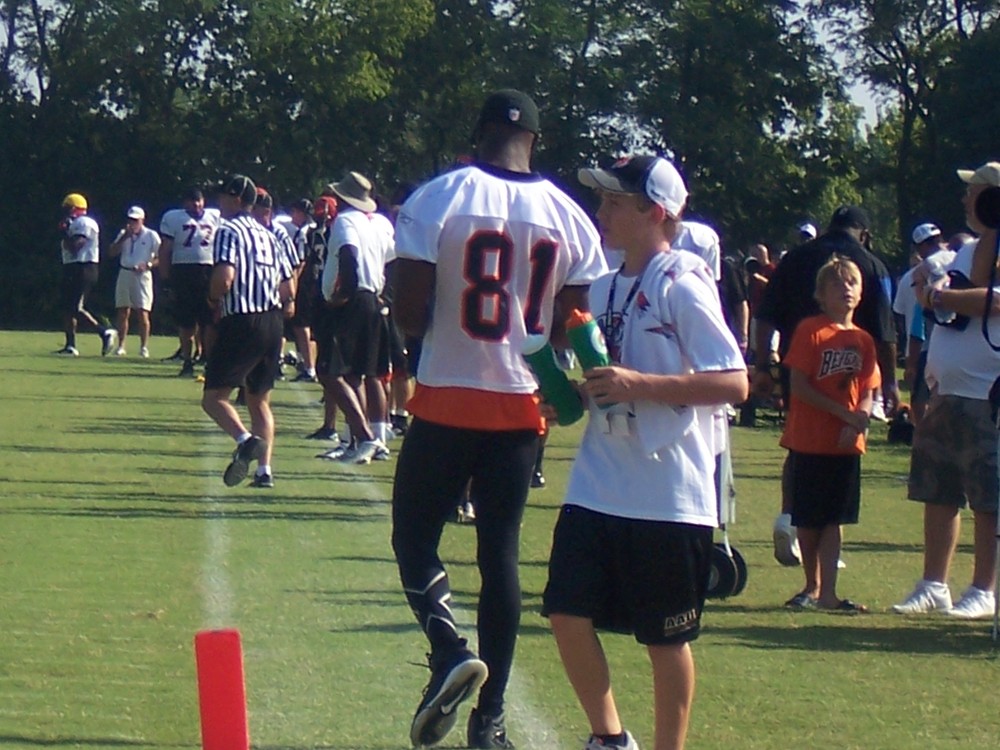 TO walking around the sidelines. He didn't practice today.

Gresham, on the other hand, did play.... a lot. He doesn't look a lot bigger than Reggie Kelly but he sure as hell looks a lot faster. When the Bengals ran position drills and Gresham was running routes with the other tight ends, he was faster and his movements were more fluid. Near the end of practice, the Bengals ran 11-11 drills. On the first play, Carson Palmer dropped back and hit Gresham across the middle on a crossing route. Gresham looked like he got some separation from the linebackers with his speed and turned up field. It was an encouraging first play to see. 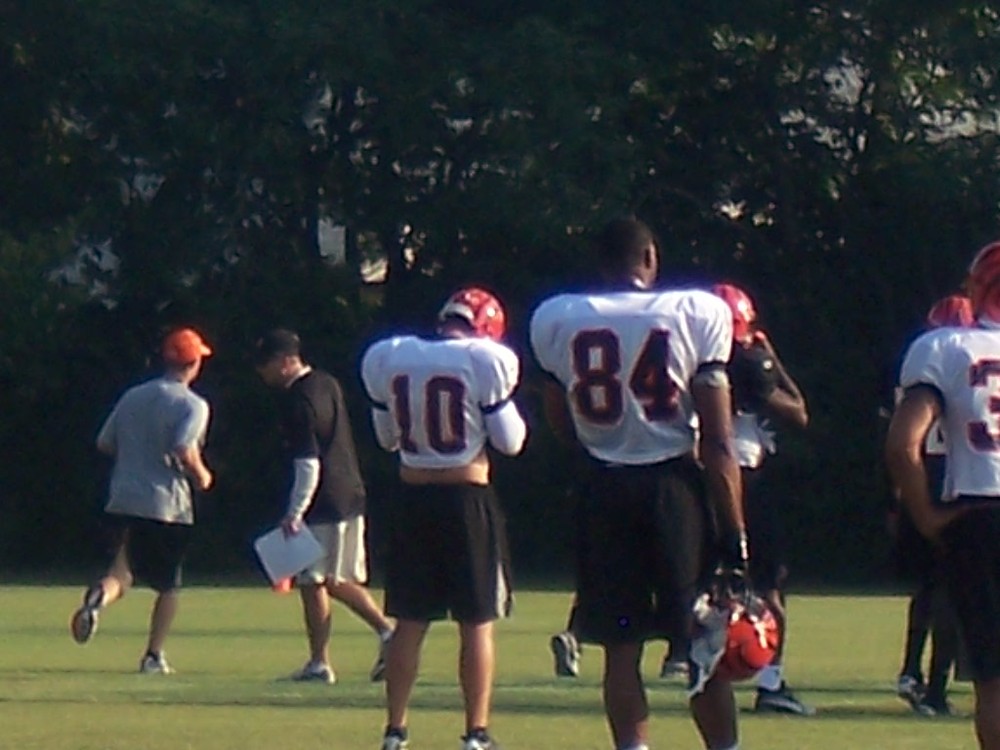 Jermaine Gresham making his way to the tight end drills where he showcased his abilities.

Speaking of Palmer, remember that zip bullet-pass that seemed to not exist last season? It's back. Palmer had plenty of pop in his arm today. He floated some in drills and he rocketed some too. He looks good. 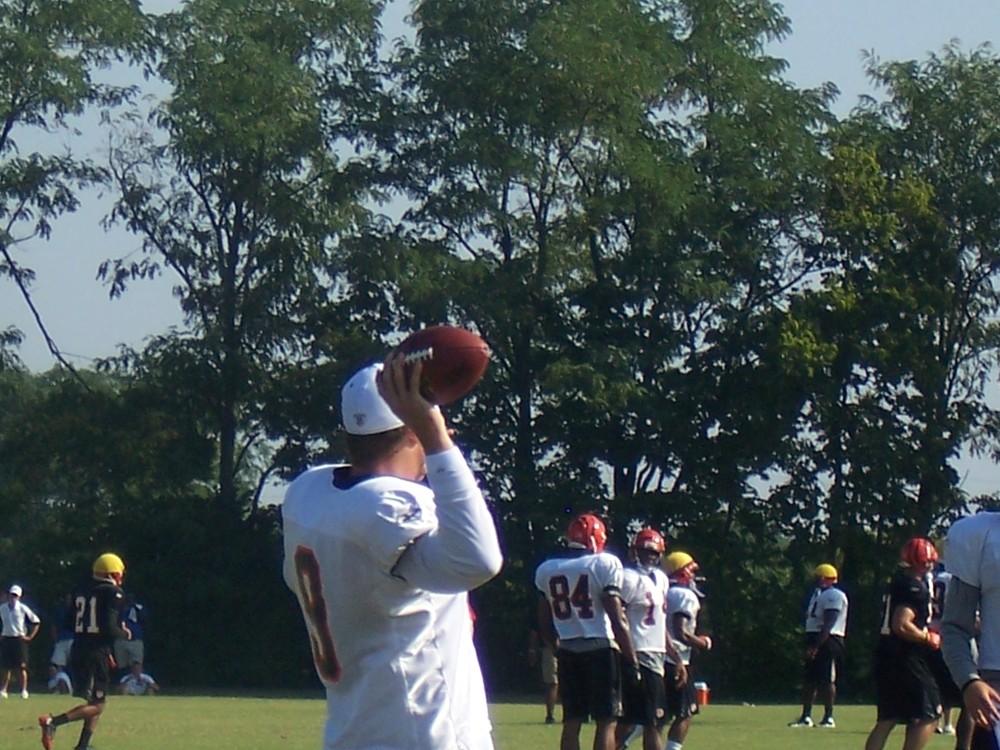 Carson Palmer warming up with his brother.

Jordan Shipley may be one of the quickest wide receivers on the team. He cut in and out of his breaks extremely fast and looks like he will be a productive member of the wide receiver corps right off the bat.

Andre Smith was in one of those rubber, weight loss suits walking around. Obviously, I couldn't tell if he was over weight or not just by looking at him but that doesn't mean he didn't look big. I know, he's supposed to be big and trust me, he definitely is. Hopefully he gets on the field soon. There were a lot of fan grumblings when Smith walked out on the practice field.

Overall, the most impressive thing I saw was the teams general attitude. Everybody seemed to be happy, optimistic and in a good mood. Bobbie Williams made a point to run along the barriers holding the fans back and gave everybody a high-five. As Carson was throwing back and forth with his younger brother, a little boy was yelling, "Carson, will you throw the ball to me?" over and over again. Carson looked over and pump-faked to the kid and made his day. And Chad... well Chad was just Chad. He spent some time talking to an attractive camera women and stretching very enthusiastically.

Other than the heat, it was a great day at Bengals training camp. Now I just can't wait till Sunday.

Oh yeah, John Calapari was there today to root on the Bengals. 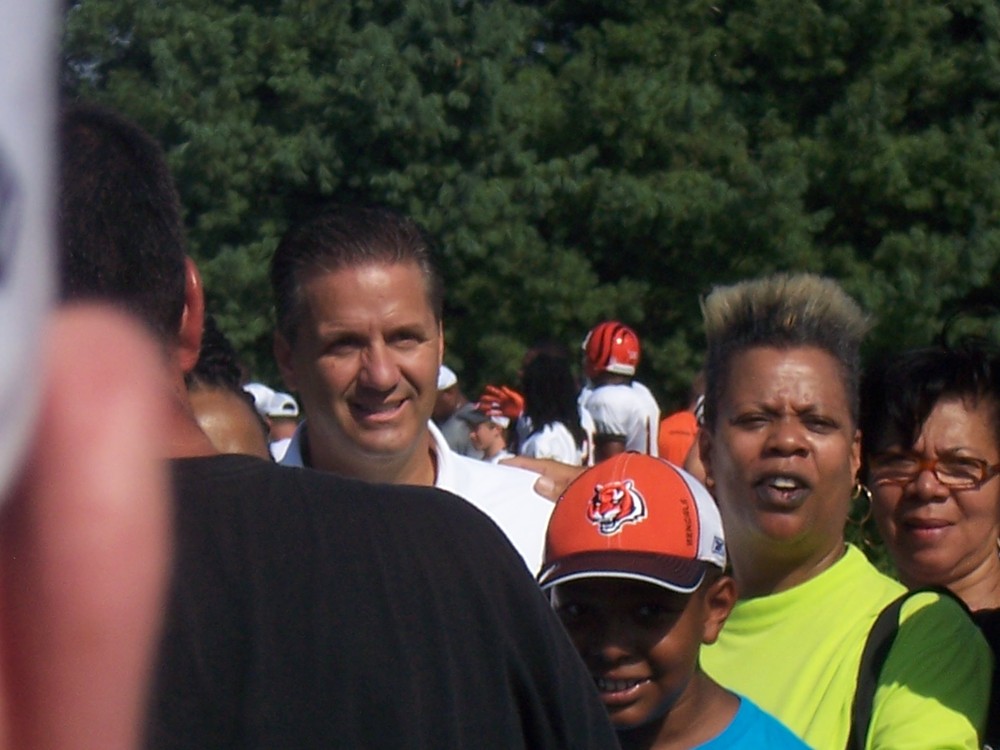 John Calapari posing for pictures with fans on the sidelines.