So the Bengals lost the Hall of Fame game. Big deal. It's only preseason (that's what I kept telling myself when I was rocking back and forth in the corner last night) and they had only a short amount of time to practice before they had to play. While it was easy to pick things out that I didn't really care for, I also saw a few things that I did like. I wrote seven of them down so I could share them with you in a weekly segment I'm going to call "Jason's Monday Touchdown". Get it... seven things I liked and seven points for a touchdown and extra point.... get it?.. ah you get it.

Point One: Geno Atkins is good.

The Bengals have been wanting to get a defensive lineman that could help the defense get some pressure on the quarterback from inside the defensive ends. Well, Geno Atkins may end up being that guy. Last night Atkins led the team in tackles with six including one sack. He may have not been playing against the starting Dallas offensive line the whole game but he also wasn't lining up against me. He played well enough that, if he keeps it up throughout the preseason, it wouldn't surprise me if he got some significant playing time in passing situations to help pressure the quarterback. 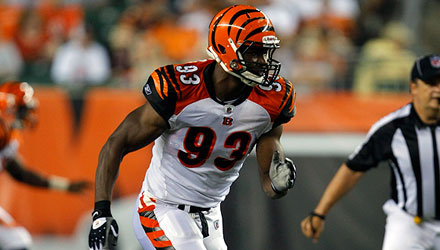 I was excited last year when the Bengals grabbed Johnson in the draft. I don't know how many times I can say that the guy is an athletic freak of nature. People shouldn't be 6'7", 270 pounds and be able to move as fast as he can. He belongs in a Marvel comic book, not on the football field. Last season he did a decent job filling in for injured Antwan Odom, getting to the quarterback three times from the defensive end position. Well, last night, Johnson got to the opposing quarterback twice from the linebacker position where he started due to the fact that Rey Maualuga didn't play. He uses his crazy speed and quickness to get around the edge before tackles and running backs really have a chance to stop him. I'm not exactly sure what will happen with Johnson. He may just play on obvious passing downs at outside linebacker, Mike Zimmer may fool around with a three-four defensive set and have Johnson and Keith Rivers as outside linebackers while Maualuga and Dhani Jones play on the inside or maybe this will be the season that Maualuga moves over to middle linebacker and gives his position to Johnson permanently. Either way, I see Johnson making a big impact on defense this season. 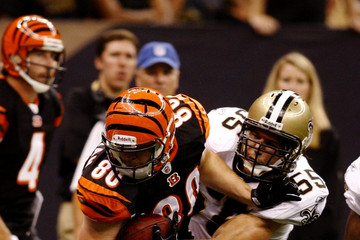 Mr. Coffman, where have you been all my life? Last night, for the first time, Coffman showed us that he may have deserved to be drafted as high as he was. I think a lot of us, maybe even including me, have written Coffman off, especially after the Bengals drafted Jermaine Gresham. Maybe a lot of us, maybe even including me, were wrong. Coffman only had one catch last night but it was good enough to really stick with me. It was on a fourth down and long. Coffman found a seam in the defense and stretched out catching a long pass that got the Bengals their first down. He looked quick and seemed to block well. I know that there's no shot of Coffman starting over Gresham, Gresham is just too big and athletic, but Coffman could be of great use in double tight end formations and in goal line situations. One catch might not feel like a very big deal but I know I almost jumped out of my seat when I saw Coffman grab that pass. Not just because it was for a first down on a night that the passing game suffered, but because it was Coffman who caught the ball. I'm willing to bet that a lot of you jumped out of your seats too. 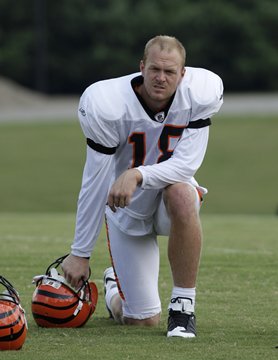 Matt Jones may have been reading what a lot of Bengals bloggers have been saying about the battle at the wide receiver position. If so, he probably had read at some point that he is probably not going to be making the team especially since the arrival of Terrell Owens. If that is the case, maybe we're partially responsible for lighting a fire under Jones. Last night Jones led the Bengals in receiving with three catches for 42 yards. TO was second with two catches for 18 yards. It looked to me like the defensive backs that were covering Jones had a hard time keeping up with him once he got going. Jones would have had another catch for about 20 yards if he had been able to keep both of his feet in bounds on a catch on the sidelines. It was ruled a catch at first but Wade Phillips thought it would be cool to throw the red flag when his team was winning 16-0 in the fourth quarter. Oh well. Jones still has a long way to go if he wants to make the final cut but, so far, he's off to a good start.

Shipley saved the Bengals from being shut out in their first game of the 2010 season. Just when it seemed that the Bengals might go the entire game without scoring a single point, Shipley ran back a punt 46 yards all the way to the Bengals two-yard line before he was knocked out of bounds, setting the Bengals up for their one and only touchdown. On top of that, he added two catches for 17 yards. The only complaint I have is on one of his catches, he had the chance to get the Bengals a first down but tried to make a guy miss by cutting back towards the line of scrimmage. He was tackled about a yard or two short and the Bengals had to punt. There would be no excuse for a veteran player to make that mistake but Shipley isn't a veteran player, he's a rookie so he has an excuse. After the play, you could see Carson Palmer talking to Shipley on the sidelines probably telling him that on third down, he needs to know where the first down line is and get to it. I've been looking forward to seeing Shipley in action just as much as I have been about Gresham. I think he has just as much potential to make the passing game effective again.

Point Six: The Safety Position Might Finally Have Some Depth

Gibril Wilson had five tackles and a forced fumble. For all of us who have been concerned about the depth at the safety position, especially after we watched Chris Crocker being helped off the field, can we stop worrying? Maybe. Wilson played well in coverage and against the run and, just like the starters Crocker and Roy Williams, he hits and he hits hard. He adds some depth to a position that lacked exactly that in the last half of the 2009 season. I'm not saying he's the future of the Bengals secondary but I think that maybe I won't jump out of a window if Crocker or Williams miss a couple of games (I'm not saying I want that to happen either). Can we stop being mad that the Bengals didn't draft a safety high in the draft now? I think so. 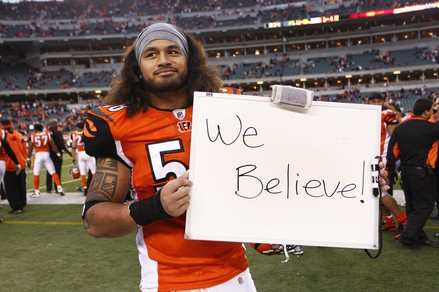 The only thing that the announcers talked a lot about before the game was TO playing with Chad Ochocinco and how the Cowboys are the best football team in the history of the universe. Well the Bengals defense may have let the Cowboys kick some field goals but "America's Team" never scored an offensive touchdown. I'm not just talking about the first string defense either. I'm talking about the first, second and third team defenses. The only touchdown that the Cowboys scored was an interception return. You don't usually win games by scoring three points at a time in the NFL. Granted, you also don't win by only scoring once but, as they say, defenses win championships. I know that the defense will be great again this year. We have the same players, plus some extra talent, and the same defensive coordinator. If that's not a recipe for another top-five defense then I just don't know how to cook... and I know my way around the kitchen (mostly the microwave area of the kitchen but that doesn't change the fact that I can cook a hell of a Hungry Man). It was a good start to a long season filled with high powered offenses for the Bengals defense.