If you've followed these pages, you're undoubtedly been prompted by deep personal questions such as: is 42 really the meaning of life, how can something so small like Hamburger Helper bring so much joy to the world?

You also know that we've brought up the topic of a Bengals fan selling his allegiance to the highest bidder in an effort to ditch his Bengals fandom for a team that wins, considering Lions and Bills fans also need not apply because "you have also proven you could care less about winning."

The fan, also known as He-Who-Must-Not-Be-Named, is now going to be a Pittsburgh Steeler fan, selling his allegiance and dignity for $510. It was originally up to $610 by the Baltimore Ravens, but apparently they weren't serious and it upset He-Who-Must-Not-Be-Named. Image that. Ravens fans mocking a former Bengals fan about to be a Steelers fan. It's like they have no class. No class at all.

The auction ended on January 17, just in time for He-Who-Must-Not-Be-Named to cheer on his new favorite team during this weekend's AFC Championship game. And we're not sure what will happen if the New York Jets win on Sunday.

NFL AND NFLPA MEET. For the first time since November, the NFL and the NFL Player's Association met as "an effort to advance the bargaining". However, the meeting wasn't meant to negotiate, doing nothing to lower fears that a work stoppage will happen.

LAURENCE MARONEY ARRESTED. Denver Broncos running back Laurence Maroney was one of several men pulled over Monday night and arrested with unlawful weapons and drug charges. According to Mile High Report,

Maroney was arrested for possession of marijuana and unlawful use of a weapon. Cops say while Maroney has a valid "Conceal and Carry" permit -- he was arrested for packing the gun while under the influence of drugs.

Obviously. Because only a sane man would save flood victims by throwing his head down from the 'chopper yelling, "grab the rope." 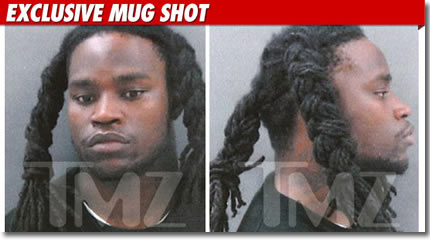 ...The University of Cincinnati Bearcats lost 66-58 to the Notre Dame Fighting Irish, who had five players in double-figures. The Bearcats have won 16 games this season. Yet the competitive Big East have the Bearcats ranked 10th in the conference with three losses to Villanova, Syracuse and Notre Dame, all ranked inside the Top-25.

...The Ohio State University won their first game as the top team in the country in a 70-48 pounding over the Iowa Hawkeyes.