Two schools exist regarding the reaction of the Bengals hiring Marvin Lewis right now. There's those that simply won't be happy with Marvin Lewis, citing historically supporting arguments, such as Lewis' 60-69-1 record and no playoff wins in eight seasons. On the other hand, there are those that took Lewis' reported demands of improving the team's basic infrastructure as a sign that the team will finally move in the right direction towards building a foundation for sustaining a winner. And most of those people acknowledge that any step towards the right direction will take time.

There's a reason Marvin Lewis criticisms have surfaced. Clock management is questioned, especially the use of timeouts, often leading to situations in which the offense desperately needed those timeouts late in the game. Lewis' challenges is another area of contention. In the first five seasons of Lewis' tenure as Bengals head coach, he successfully overturned 25% of his challenges (9/36). In the past three seasons, Lewis' success rate on challenges increased to 63.6%.

However, there are reasons why fans want Lewis to stay. Such as Lewis being the head coach of the most competitive Bengals teams during Mike Brown's ownership. Lewis is also the only head coach that's taken the Bengals to the playoffs, posting multiple winning seasons during Mike Brown's sidious empire. The greater enthusiasm for Lewis' return surrounds the head coach's demand that the team integrate the most basic infrastructure components that most NFL teams have already integrated. Lewis just wants an even playing field. His return gives Bengals fans the sense that changes are coming, although exactly what those changes are is cryptic and unknown.

After reading through Marvin Lewis' vague and colorless press conference with Mike Brown announcing his new contract, Joe Reedy writes that "when it comes to football matters and philosophy, it appears Lewis will be given greater autonomy, from discipline to deciding who will be inactive on gamedays." Now, if you're like me and asking, "Marvin didn't make THAT decision in the first place?" then I'm just at as speechless a you.

Yet, Tuesday's press conference announcing Lewis' two-year contract was a way for the Bengals to bring fans back into the fold, imploring patience by committing to the ideas of what fans believe will make this franchise successful in the future -- and that first step is becoming a team that's built like other NFL teams. There's no way that the Bengals could possibly think that fans would dive head first into a zombie state of fanatics. Yet, for fans to expect black and white solutions from an owner that keeps you at arm's length, you're not getting them.

Did they win you? No. Mike Brown sat beside Marvin Lewis, in which Dave Lapham said they looked "like they have just consumed a crap sandwich", losing you, the fans at the exact moment that the franchise President could have won you for a second-wind, a new start. And yes, we agree that Lapham should call it a turd sandwich. 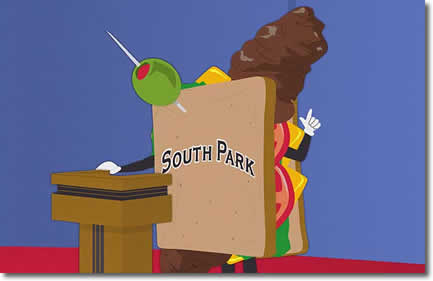 When asked if Marvin Lewis has more control over personnel issues, Lewis said:

"I don’t know where that comes from, because I don’t know if I’ve sat down here and ever said that (that he less than unsatisfied with control over personnel). People keep putting that out there. I have a lot of input in our personnel. It’s Mike’s ultimate say-so."

No change. Alright. Fine. None of us expected Brown to relinquish control over personnel decisions.

When asked if the team will build an indoor practice facility, Mike Brown said:

"Marvin has a desire to have a practice facility. I have a desire, but probably not as keen... Right now, we’re faced with major issues in the National Football League, and those are at the front of our agenda. When we get through that, then we’ll have time to consider this issue."

When asked if he can chew bubble gum and walk to his office, he couldn't speak because, well, he had just put a stick of bubble gum in his mouth. In other words, no indoor practice facility and the Bengals will just blame the CBA for an extended delay of building the facility to the point that Marvin Lewis will most likely leave.

When asked if there were changes planned for the scouting and personnel departments, Brown said.

"The scouting thing is another criticism that rises up when we don’t do well. If you look at our record on scouting over the last 10 years, we rank 10th for the number of games played by players we drafted."

Both Brown and Lewis did confirm that there's going to changes with the coaches. Whether or not Lewis has autonomy on those coaching decisions, or he was simply providing Brown with a list of coaches he wants to replace in order for him to remain, is unknown. And the greater question is, which coach? If it's Bob Bratkowski, fans will finance a Marvin Lewis statue, depicting him wearing a toga on Fountain Square. If it's not Bratkowski, then man will devolve into brutal neanderthals with clubs, beating each other over the head because that's all we know.