Share All sharing options for: Grading The Trenches: Bengals O-Line Gets Reality Check

Rough Day For The Bengals Up Front

I have only one reasonable explanation for Andrew Whitworth having his worst game of the season and actually looking human for once. Jaguars DE Jeremy Mincey is made of Kryptonite. Yes, that's what we'll go with. In all seriousness, playing in Jacksonville amd using the Bengals stupid silent shotgun snap didn't help. You know what I'm talking about. You know when Nate Livings taps Kyle Cook to snap the ball? Well if we're noticing it, and Jaguars fans are noticing it, then every defensive player in the NFL should notice it and exploit it. When it looked like some Jags linemen were off sides, it was because they could visibly see the snap count. As soon as Nate Livings was tapping Cook, they were taking off. Whitworth was still good (13 winning blocks), but not his elite self (7 losing blocks).

When it comes to the running game, my worst fears about Nate Livings were confirmed. With Bobbie Williams back in the lineup, the Bengals were using Livings to pull and block linebackers on the 2nd level much more often. This isn't Livings' game. He's more of a power run blocker who can fight off defensive tackles. He doesn't belong in space trying to catch linebackers. I've backed Nate Livings all year, but if this is how they'll continue to use him, he just doesn't fit this offense. He ended the game with 8 winning blocks and 11 losing blocks.

Andre Smith continued his trend of playing well one week, and playing terrible in the next week. He's visibly getting better, but his the Adam Dunn of the Bengals O-line. Smith is either striking out or hitting home runs. Andre Smith ended up with 9 of his 13 losing blocks in the running game. With only Bobbie Williams (+3.0) and Whitworth (+0.5) scoring positive in the running game, its no wonder why the Bengals struggled to move the ball on the ground.

With the entire Bengals offensive line having their worst day of the season, the boost that was expected from Bobbie Williams was evident. He finished the game with 13 winning blocks and only 6 losing blocks. Williams' biggest contribution was in the running game where he had 10 of his 13 winning blocks. He ended up with the best total grade among his line mates with a +3.5 grade.

Expect This To Continue

What we said last week in our Keys vs. Jaguars:

Before the Bills game in week four, the Bengals only tried using the draw play to run the ball four times. When they did, the Bengals averaged 6-yards per carry. Jay Gruden must have noticed how well it has worked because against the Bills, the Bengals used the draw play five times averaging 7.6-yards per carry. Look for this play to become used more in this offense. Dalton was passing the ball out of the shotgun on 62 of 64 plays before the last game. Teams didn't feel the treat of the Bengals running it and started pinning their ears back to bring the pressure. Now with the draw play in use, defenses will have to play a bit more honest or get burned at 7-yards a pop.

Not only did we see more of the draw play, we saw it a total of seven times against the Jaguars. It wasn't as successful as it's been, and the Bengals only averaged 3-yards per draw play, but it's still an effective tool to slow pass rushers and stall linebackers. Expect it to continue.

The Bengals have a total of 71-plays in the 3rd Quarter this year for a total of 399-yards and 24-points. Those numbers are inflated by two touchdown drives vs. The Broncos where the Bengals drove 132-yards in only 14-plays and scored 14-points.

The issue here in consistency and the frequency of big plays. In the drives that have resulted in scores, the Bengals are averaging 10.6 yards per play. That's a huge difference from the 2.5 yards per play in non-scoring drives. Getting chunk yardage and making big plays will give this team more opportunity to score. Long drives will require more disciplined play and more 3rd down conversions. Both can be the death of a young team's confidence.

3rd Down History Through Five Games

This has been the biggest issue holding the Bengals offense back in most weeks. I did some research and tallied up all of the Bengals 3rd down plays from this season. Here's what I came up with:

In games where the Bengals won, their average 3rd down distance is 5.9 yards. In those same games, the Bengals are gaining on average 4.1 yards on 3rd down.

In games where the Bengals have lost, their average 3rd down distance is 8.1 yards. In those same games, the Bengals are only gaining 2.1 yards on 3rd down. 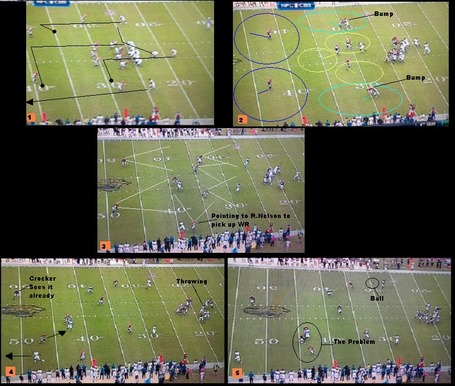 This play could've cost the Bengals the win. I understand when somebody is just trying to make a play and it's even more understandable when the entire secondary doesn't have an interception yet. But Reggie Nelson has blown coverages already this year and this one was inexcusable. He gets 90% of the blame. I do give a little blame to Leon Hall for carrying Jason Hill so far. If you look at picture 3, you can see that Leon Hall is just now releasing Jason Hill at the 43-yard line. At the same time, Nate Clements has released his WR at the 38-yard line. This may have confused Nelson as to which coverage they were playing. Still Nelson's fault, but Hall didn't help by overplaying his responsibilities.