Even though beat writers and NFL insiders were promoting that Carson Palmer was traded to the Oakland Raiders for their 2012 first round pick and 2013 second round selection (upgraded to a first if the Raiders win a playoff game), the fact that both organizations and the NFL remained quiet installed a little nervousness amongst fans. Truth is that the Bengals have a history of nervousness, considering botched deals with Warren Sapp, Donte Whitner and Shaun Rogers were at one point, done deals turned out to be false.

This isn't the same Cincinnati Bengals and fan nervousness can now cease because the deal is now official.

According to their twitter account, the Oakland Raiders have announced that they acquired Quarterback Carson Palmer from the Bengals (with a picture):

@RAIDERS
OAKLAND RAIDERS The Oakland Raiders have acquired QB Carson Palmer via a trade with the Cincinnati Bengals http://t.co/JCWi5TC5
Oct 18 via Photos on iOSFavoriteRetweetReply 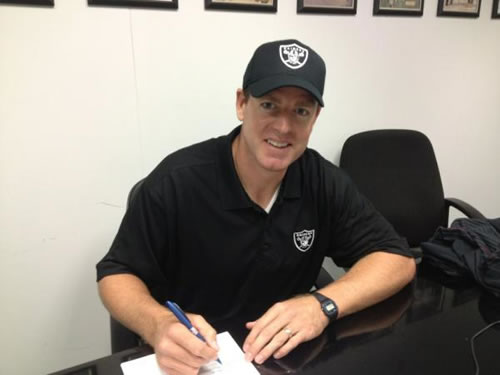