Share All sharing options for: Cincinnati Enquirer Announces Their Ring Of Fame 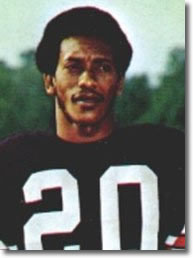 Much like the effort by Bengals.com to make an independent Hall of Fame to honor the team's legendary players during its 43-year history, the Cincinnati Enquirer brought together a panel of sports writers, with the help of Dave Lapham (the panel's lone former Bengals player), to come up with their own "Ring of Fame".

Since the panel was unable to "choose the top 15", finding it too "difficult to narrow a 44-person field", the panel made four rings with 20 former Bengals players.

"Bengals alumni are my passion," he e-mailed the Enquirer. "Choosing rings was more difficult than exchanging them. Now the Bengals franchise needs to make these 'Rings of Fame' real."

We couldn't agree more. The Bengals.com website honoring the team's history by recognizing some of the great players that's played for the Cincinnati Bengals, was a great promotion and continues to be so. Additionally the Enquirer doing something similar is a wonderful effort to install remembrance with the legendary players most of us grew up watching. Case in point from a comment we enjoyed reading:

Why on earth are Corey "quitter" Dillon and 85 even mentioned in the same article as these other greats from the Bengals past? Doesn't matter what Dillon accomplished on the field with the Bengals, or after he left.

Let's rewind to 1976 when cornerback Lemar Parrish, one of the true greats in franchise history, demanded that Paul Brown trade him because he wasn't being fairly compensated and that Paul Brown was increasingly hard on the players:

"Paul never showed any affection for the guys," he added. "I don't care how good you are or how good you play, a guy likes to hear something from the coach."

"If they can't meet my salary standards, I got to move. I can't spend glory."

Along with Coy Bacon (the team's single-season quarterback sack record holder), Parrish was traded to the Washington Redskins for their first round pick in 1979, leaving Cincinnati as one of the best cornerbacks this team has ever seen -- some would argue better than Ken Riley. You have to focus on the player that played in Cincinnati, not the personality that tried to leave because a list like this truly honors the player's accomplishments on the field.

We also recognize the difficulty in creating a list of 20 great players on the hall of fame, but one has to make an argument for Eddie Edwards, Reggie Williams or Ross Browner; all Super Bowl starters or players with significant contributions during their respective Super Bowl seasons.

Many younger fans have only experienced the Mike Brown era of Cincinnati Bengals and that's a damn shame, because this team does have enough history to make one damn proud to be a Cincinnati Bengals fan. If the Cincinnati Bengals aren't going to be the one's that recognize their history with a hall of fame or a ring of honor/fame, then at least others will. But Chick's right. The Bengals should be the one's spearheading the effort, not their website or the local newspaper.