Marvin Lewis told us that he thought this was the biggest game of his nine-year head coaching career. It seems he was right. Before the Bengals lost to the Texans on Sunday, they were holding on (by a pinky finger) to the sixth seed in the AFC playoff picture.

Now that they've lost, they're out of the AFC playoff picture and they're not even the next in line. The Bengals will need to win out, which means beating the Ravens in Week 17, to have a shot at playing in the post season.

With a win over the Kansas City Chiefs, the New York Jets have officially replaced the Cincinnati Bengals as the sixth seed in the AFC. The Bengals, losing to the Texans, dropped out of the playoffs down to eighth place in the conference, one place behind the Tennessee Titans. 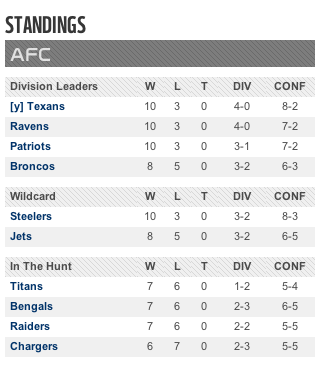 To have a shot at getting back into the playoffs, the Cincinnati Bengals will first need to go to St. Louis and beat the 2-10 Rams (who play the Seahawks on Monday Night Football tonight). Then they'll have to face the 5-7 Arizona Cardinals at home in Week 16. Finally, in Week 17 the Bengals will need to beat the 10-3 Ravens at home.

Perhaps they beat the Rams and Cardinals and by the time they play the Ravens, Baltimore sits their players and does the same thing for us that we did for the Jets in Week 17 in 2009. Either way, the Bengals have an uphill battle to get into the playoffs now.

What do you think their chances are?