News Regarding Cincy Jungle: Record Month And Maybe A "Hiring" To Come?

Share All sharing options for: News Regarding Cincy Jungle: Record Month And Maybe A "Hiring" To Come?

When I first joined SB Nation, the Cincinnati Bengals had come off a playoff season in 2005 and entered the Year. You know the year, players were arrested, shamed and Bengals fans were simply embarrassed. Drunk driving, puking out the windows, parking on sidewalks, fighting bouncers with laced cigarettes, we literally had it all that year. No doubt. Things have calmed down significantly since then with issues off the field, but it was a trial by fire offseason for me.

I kicked off SB Nation's Bengals blog in March of 2006 and had 715 people drop by. Seven. Hundred. And. Fifteen. You're thinking what I'm thinking, right? That's awesome! There are 715 people on the internet that wanted to check this site out. Some of you might remember what it looked like. Here's a screen print of the old days, all the way back to March 19, 2006. 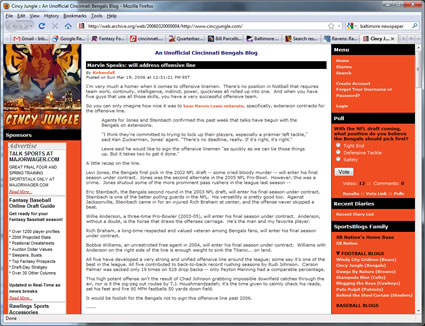 Many years later, Cincy Jungle keeps raising the bar, reaching new heights and in January, we reached a record traffic for a single month. Probably has something to do with Marvin Lewis' contract situation or Carson Palmer's trade demand. Hey, What About Bob? Five years ago, our best month was 715 people. This past month, we nearly reached half a million page views. So from everyone at CincyJungle.com, thank you for making us one of the go-to destinations for all Bengals fans.

The last thing I said on my first ever post? "Let's dig in. This will be fun." About a month away from our five year anniversary, nothing has changed.

IN OTHER SITE NEWS. We will be "hiring" soon. So if you're interested in joining our team, keep checking back for more information.

Even then, it's surprising how big this thing becomes. For instance, Rob Neyer has been ESPN's baseball writer for 15 years. Had been, I should say. On Tuesday, it's announced that Neyer is leaving ESPN to join SB Nation as the National Baseball Writer. Join me in welcoming Neyer to the SB Nation family.

+ And Finally. For those of you having issues embedding YouTube videos in FanShots and FanPosts, here's a brief step-by-step instruction on how to do it.