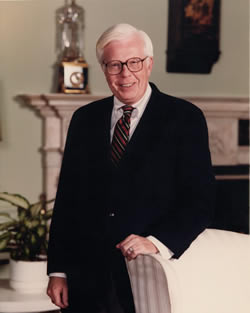 Raymond Buse Jr., a former Cincinnati Bengals and Cincinnati Reds owner, died in his Hyde Park home on March 3 according to his family.

In the late 1960s, he and his brother joined two separate ownership groups - one formed to keep the Reds in Cincinnati and the other to operate a fledgling AFL franchise. The Buse brothers served as owners/directors of the Reds during the Big Red Machine era, highlighted by two World Series wins, and of the Bengals during the Paul Brown era, which was marked by two Super Bowl appearances.

Services will be held on Saturday and the burial will be at Heaven Cemetery in Montgomery.

We don't know much about the Buse brothers, or Raymond in particular. So if you have some knowledge, drop us a line.

Raymond L. (Pat) Buse Jr. — who earned national acclaim as a business leader, major-league sports owner, whiskey distiller and thoroughbred owner and breeder — passed away Thursday, March 3, at his home in Hyde Park. He was 85.

Known as "The Senator" in Cincinnati social circles for his distinguished stature and booming voice, he was as much at home along the dusty shed rows of Ohio and Kentucky racetracks and, most especially, in the stables and paddocks of his beloved Meadow Springs Farm, a 90-acre thoroughbred-breeding operation in Clermont County, OH.

His zest for life produced colorful adventures of every variety. A native Cincinnatian, he grew up in Hyde Park, graduated from St. Xavier High School and Georgetown University, and served a stint in the U.S. Army during World War II. After attending law school at the University of Cincinnati for a year, he went to work full-time for the family business, the R.L. Buse Co., a whiskey brokerage firm founded by his father and headquartered in the Carew Tower. His business acumen overseeing production and branding at the family's Old Boone Distillery in Meadowlawn, KY, quickly gained momentum and prominence as he steered the company to be regarded as one of the most successful whiskey brokerages in the nation. He accomplished this despite a lifelong fear of flying, and as a result drove nearly every major highway in the lower 48 states promoting family brands such as Distiller's Pride, Meadow Springs and Virgin Bourbon, as well as a consistent revenue-generator: custom-made labels for major hotels, resorts and country clubs that sought the prestige of bottles behind the bar depicting their own facades.

Even though his sales calls took him to the nation's finest hotels and resorts, his Irish-German frugality insisted on staying at Howard Johnson's at nearly stop. One sales call at a Washington hotel proved to be particularly auspicious. He persuaded the general manager to order a full complement of custom-labeled spirits for the hotel bar, and when the break-in and resulting cover-up at the Watergate Hotel reached a fever pitch in the national media in 1972-73, so, too, did sales of Watergate Bourbon at the cash register. As fortune would have it, Democrats clamored for the niche brand to serve at Democratic Party gatherings from coast to coast. This loyal Republican distiller had but one regret: He literally could not bottle Watergate Bourbon and sell it to the Democrats fast enough.

Family and sports were lifelong passions. Throughout his life, Mr. Buse mentored younger brother, J. Barrett (Barry) Buse, and sisters Roseanne (Reggie) Brockman and Mary Jane (MJ) Clark (deceased). In the late 1960s, he and Barry joined two separate ownership groups — one formed to keep the Reds in Cincinnati and the other to operate a fledgling AFL franchise. The collaboration between the new ownership groups of the Reds and Bengals resulted in the opening of Riverfront Stadium in 1970 and an entirely new vision for Downtown and the riverfront. The Buse brothers served as owners/directors of the Reds during the Big Red Machine era, highlighted by two World Series wins, and of the Bengals during the Paul Brown era, which was marked by two Super Bowl appearances.

Mr. Buse's business vision also led to a sizable family investment in the initial development of Northgate Mall — when Colerain Avenue was no more than a desolate, two-lane road — and he contributed to hundreds of charitable endeavors throughout his lifetime.

A dedicated philatelist of national renown and an avid collector of Cincinnati art, his entry into the thoroughbred industry was not entirely by his own choosing. He followed the other members of the Buse family— children Barb (Bebe), Jane and Buz, and wife Marge (deceased), in catching the horse bug. In the 1960s he purchased a 100-acre horse farm outside of Milford, and soon he was studying horse stock at the Fasig-Tipton and Keeneland yearling sales, directing the breeding of brood mares and raising thoroughbreds for the track. A quick study, in a few short years he was elected president of the Ohio Thoroughbred Breeders and Owners Association and remained influential in the Ohio and Kentucky thoroughbred industries throughout his life.

His thoroughbreds earned hundreds of satisfying wins bearing the colors of Georgetown University — blue and gray silks with a blue B set in a gray diamond. His racing stable over the years featured many fillies with names inspired by Mr. Buse's alma mater, such as Lady Hoya and Georgetown Miss. His most popular racehorse — a filly named Round Bottom for the road linking Newtown to Perintown, OH — proved to be a huge bettors' favorite at area tracks in the early 1970s, partly for her competitive heart but equally for her endearing name. Round Bottom won eight races, ran second or third 20 other times and earned the title of champion Ohio-bred 3-year-old filly. But to Mr. Buse's mindset, her success was made even sweeter by her game ability to inspire an entire grandstand of race fans from every walk of life to yell in unison, "C'mon Round Bottom!"

During his thoroughbred breeding career, Mr. Buse owned three horse farms, two in Ohio and the landmark 400-acre Ellis Farm outside of Walton, KY. He was a true pioneer of his generation, being one of the first ever in the Cincinnati USA region to serve as a business leader on both sides of the Ohio River. When he stepped out of the whiskey business, he opened a financial consulting firm — Buse Financial Services — in the historic Grant House in Covington. He also bought and managed a bank in Dry Ridge, KY, and for many years served on the boards of Huntington Bank and the Behringer-Crawford Museum, both in Covington, as well as the Boone County Planning Commission in Florence and Fasig-Tipton Kentucky. He also served on the boards of St. Xavier High School, Thomas More College, Georgetown University, the Friendly Sons of St. Patrick, the Cincinnati Reds and Cincinnati Bengals.

He was not all business, though. He relished the hospitality scene wherever he traveled and was a gracious host at all manner of civic and charitable functions. On special occasions he would unveil his true Irish-German personality with a top-hat-and-cane routine — which became the stuff of local legend and was attributed, by his many friends, to the family's carefully distilled products. "Life is for living," he often would say, "and you owe it to yourself to have fun." He was never cheated on that.

Ever a visionary and noted for young ideas into his 80s, he recently introduced a solar energy system at his Clermont County farm. His commitment to running a state-of-the-art breeding operation at Meadow Springs Farm earned him national recognition in the thoroughbred industry.

Throughout his life, Mr. Buse remained fiercely loyal to Cincinnati, though that unabashed loyalty also prompted him to challenge elected officials, business leaders and even Bengals head coaches if he felt they lacked for the proper ambitious thinking. His favorite saying was, "God gave you a brain — use it," a call to action he issued often in his booming voice to family members and business colleagues alike. He personified that virtue in every phase of his life and career — a scholarly business leader, a thinking-man's sports owner and a gentleman horse owner — worthy of being called "The Senator" from the highest social circles to the dustiest shed rows, and every place in between.