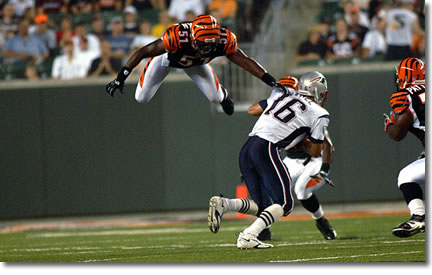 As we continue with our Draft Bust and Success series, starting with Busts, we have to make a brief introduction into a small flaw associated with this selection. Most of the time, busts are generally attributed to first round selections; but that's not always the case. Today, we're going to make that case for an unexpected disappointment after a fantastic rookie season.

Selected in the second round of the 2005 NFL Draft, Georgia linebacker Odell Thurman was the second of two linebackers selected in the first two rounds that year that were expected to become the foundation of the team's defense. Along with recording 100 tackles, Odell Thurman posted five interceptions, four forced fumbles, four passes defensed and 1.5 quarterback sacks. His first year resulted awarded him as a finalist for NFL Defensive Rookie of the Year that was won by San Diego's Shawne Merriman.

Along with Pollack's injury, Thurman's issues, which we'll get to in a second, set the Bengals backwards with a rag-tag group of linebackers in 2007, forcing the team to address the position again during the 2008 and 2009 NFL Drafts.

During the offseason after his rookie campaign, Thurman was suspended for the first four games in 2006 after violating the league's substance abuse policy by failing to take a required test. Thurman was later arrested for drunk driving in late September 2006 and suspended for the rest of the season.

In early June 2007, Thurman and his brother were accused of assault against two men but the charges were dropped due to conflicting statements from witnesses. That didn't prevent NFL Commissioner Roger Goodell from denying Thurman's reinstatement into the NFL, suspending the inside linebacker for two straight years.

In April 2008, the NFL finally reinstated Thurman and the Bengals placed him on their offseason roster. Not even a month later, the Bengals waived Thurman due to another failed drug test, which prompted the league to suspend Thurman indefinitely.

Thurman has since resurfaced in the United Football League.