With the 66th pick of the 2011 NFL Draft, the Cincinnati Bengals select Nevada outside linebacker Dontay Moch. This could seal the ending of Dhani Jones, which would prompt the team to move Rey Maualuga to inside linebacker and create open competition between Roddrick Muckelroy and Dontay Moch as the strong-side linebacker. Another scenario, it could also be in response to losing Brandon Johnson, who will also be a free agent once the new league year starts. Moch gives the Bengals an aggressive pass rusher on third down.

Either way the Cincinnati Bengals went with defense as their third selection this year after kicking off this draft with a wide receiver and a quarterback.

In 2009, Moch was a first-team All-WAC and the WAC Defensive Player of the Year and in 2008, Moch set the Nevada single-season record for most quarterback sacks in a season (11.5). According to CBSSports.com:

Positives: Three-year starter at end is a record-setting pass rusher with superior speed who projects well to the outside linebacker position in the NFL. Played some outside linebacker as a freshman, and often was given assignments dropping off from end. Quick off the snap. Good at shedding blocks with his hands, and has a strong bull rush. Can flat out fly. Big hitter, fearless. Can be effective dropping off into zone coverage against the pass. Productive, durable, intense defensive leader.

Negatives: Former track star. Stiff in the hips and simply cannot change directions well. Pass rush either works on initial quickness and speed or it fails. Lacks a double move. Not stout against the run as a down lineman. Will have great difficulty with NFL man coverage assignments as a linebacker. Did very little in one-on-one attempts against Boston College's Anthony Castonzo in the Kraft Fight Hunger Bowl.

According to ESPN's DraftTracker, Moch is rated as the fifth best outside linebacker in the draft. 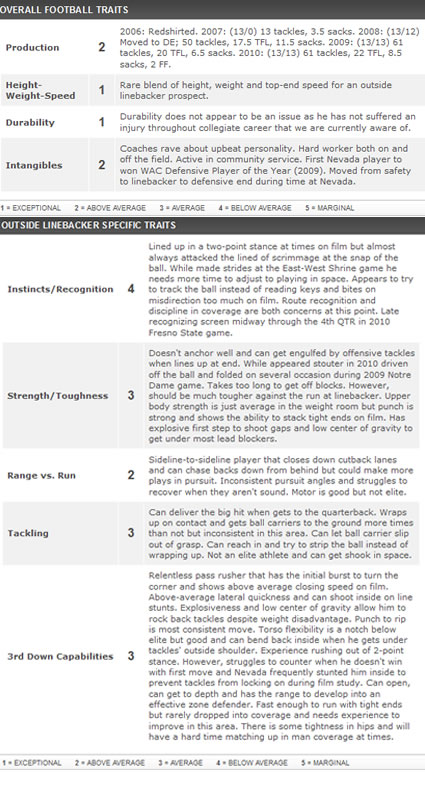