With the 167th selection of the 211 NFL Draft, the Cincinnati Bengals select Stanford wide receiver Ryan Whalen. Even though the Bengals selected a wide receiver in the first round of the draft, the team figures they need to rebuild the position by open competition for the final two spots on the roster. After A.J. Green, Jerome Simpson, Andre Caldwell and Jordan Shipley, the Bengals have a collection of receivers like Quan Cosby and Shay Hodge. A selection strictly to help rebuild the roster and for special teams, Whalen offers that.

As a three-year starter with a four-year career, Whalen posted 140 career receptions for 1,884 yards receiving and seven touchdowns. He was named as an honorable mention All-Pac 10 selection in 2010 and 2009.

Strengths: Owns solid frame with more upper- and lower-body bulk than many receivers in the class. Tracks deep passes well and will fight for jump balls all over the field. Former walk-on who is a very coachable player. Works hard and gives full effort in the running and passing game. Flashes enough strength to control defenders as a blocker and uses long arms and solid base to lock on when stalk blocking. Reliable receiver who will work the middle of the field and sell out to make tough catches. Has the hands and wrist strength to secure the ball and hold on after contact even if exposed. Locates holes in zone coverage and settles in without drifting back to defenders. Sets up routes with head fake and shows good discipline when selling a corner on the wrong pattern. Will work back to the football and shield defenders with his body.

Weaknesses: Lacks the necessary second gear to consistently separate on vertical routes. Is not elusive after the catch and is not physical enough to break tackles and run over defenders. Struggles to eat up cushion out of his stance with a slow first step and lack of explosion. Not a gifted athlete and gets ahead of himself when stemming routes, causing him to lose balance when cutting. Falters and takes false steps when trying to slip press coverage and can be stymied early by aggressive corners. Allows defenders to redirect him at the line and lacks the burst to get back into position in a timely manner. Will lose focus at times and drop catchable passes. Looks to run before securing the ball and takes his eyes off the throw. Can allow ball into his body and lose possession on contact. 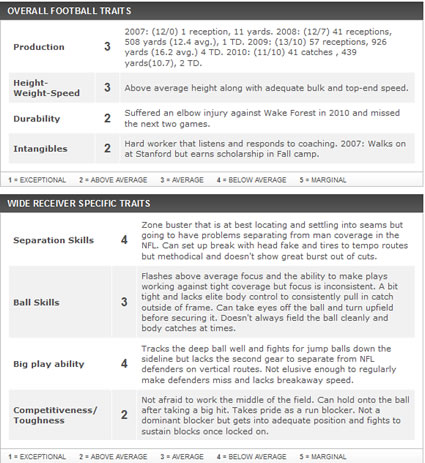