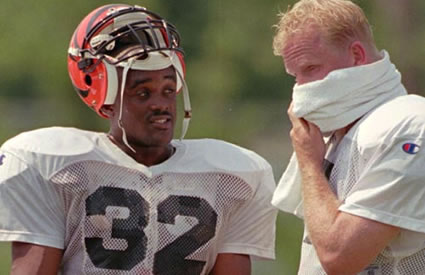 During his junior year at Penn State, which would become his final season in college, running back Ki-Jana Carter rushed for 1,539 yards, scoring 23 touchdowns and averaging 7.8 yards/rush. He finished second in the Heisman voting that year, earned a co-MVP for the Rose Bowl with 156 yards and three touchdowns and led the Nittany Lions to an undefeated season in 1994.

After a season in which fullback Derrick Fenner led the Bengals with 468 yards rushing with the team's (typical) feature back Harold Green averaging 2.9 yards/rush that year, the Bengals were in need of a running back. Desperate need. Actually around that time, they needed a lot of new players.

Carter's junior season generated a lot of interest for a team desperately needing a running back. So much interest that the Cincinnati Bengals traded their 5th and 36th overall draft picks to the Carolina Panthers so they could have the first overall selection. And you better well believe that they're selecting the best running back in the class.

And a reminder how contracts were manageable back in the day, Carter, the league's first overall draft pick, signed a $19.2 million contract with a $7.125 signing bonus over seven seasons. This was the highest contract given to an NFL rookie at the time.

Then, just as fate laughed at the Bengals in the final decade of the 20th century, Carter took his third preseason snap and shredded his knee. Out for the entire 1995 season, Carter made a slight rebound the following two seasons, becoming primarily goalline back, posting 15 touchdowns. However, he was never made the team's feature back with Garrison Heart and Corey Dillon taking on that role in 1996 and 1997. Carter's final two seasons of his five-year career in Cincinnati ended with four games, eight carries and one touchdown.

Carter would finish his career with the Washington Redskins and New Orleans Saints.

We hate listing injured players as busts. But the truth is Carter was a stellar running back in college, drafted first overall because the Bengals traded away their first and second round picks and finished with just one 100-yard game and 747 yards rushing with the Bengals.