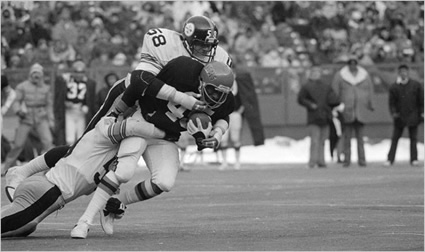 Archie Griffin will go down as one of the best running backs in Buckeyes history, posting over 4,700 yards rushing in his final three seasons at the Ohio State University and 23 rushing touchdowns. Griffin is the only player in the history of college football to win two Heisman trophies. He also won two Ten Ten MVP awards was a two-time Walter Camp Foundation top player and the Maxwell Award winner in 1975. Griffin is also only one of two players ever to start in four Rose Bowl games in a career. His number 45 was retired by the Buckeyes. He's enshrined in the College Football Hall of Fame, the Varsity O Hall of Fame and the Rose Bowl Hall of Fame.

You literally couldn't do more than what Archie Griffin did in a college career, even if you rode into battle and sliced through the Orcs of Middle Earth, the Darkspawn of Ferelden, The Trollocs of Two Rivers or the Munchkins of Oz (what? They freak me out, alright?).

The Cincinnati Bengals 1975 squad sported a running attack of Boobie Clark, Stan Fritts and Lenvil Elliot that combined for 1,277 yards rushing and 13 touchdowns -- Fritts and Elliot combined for another five touchdowns receiving. So the Bengals selected Oklahoma wide receiver Billy Brooks with their 11th overall selection in the 1976 NFL Draft. Brooks would go on to have a very quiet career, in the sense that no one would really take notice of him. In four seasons with the Bengals, Brooks caught 93 passes for 1,683 yards receiving and seven touchdowns.

What's maddening is that he's not even our biggest bust of the draft.

Selected 24th overall in the same draft, Griffin recorded only seven touchdowns in his seven-year NFL career (all with Cincinnati), without scoring a touchdown through four consecutive seasons and never leading the Bengals in rushing during any season. Griffin's career year came in 1979, rushing for 688 yards rushing in 1979. A decent receiver out of the backfield with six touchdowns receiving, four of his last five seasons, Griffin recorded a yard/rush average below four yards.

There are times that the word bust can incite a seriously negative image. That's not always the case. In the technical-sense of this argument, a player with a great college career drafted in the first round can still be a bust; be it because of injury (ala David Pollack, Ki-Jana Carter) or the inability to surpass players on the depth chart. Not every bust argument is similar to someone like Ryan Leaf or Akili Smith, who just couldn't handle being a professional football player.

Griffin had a tremendous college career was drafted in the first round and never played up anything close to the production he had in college.