Ever since sacks became an official statistic in 1982, teams have searched high and low for defensive players that could find their way to the quarterback. Players like DeMarcus Ware, Clay Matthews, John Abraham, Jared Allen and Dwight Freeney have made names for themselves in the NFL as sack artists and because of that, they've earned themselves some pretty decent sized pay checks.

The NFL is a passing league, there is no question about that. Power running teams that lack a passing game may make it to the playoffs every once in a while (see Bengals 2009 and possibly 2011), but it's the teams that have a good passing attack that win Super Bowls. Because of that, defenses not only need a strong secondary to blanket receivers, but they also need some guys who have a knack for hitting the quarterback before he's able to throw the ball.

The Steelers and Packers led the league in sacks in 2010. Those were the two teams that played in the Super Bowl. Coincidence? I don't think so.

In 2009, the Bengals defense sacked an opposing quarterback 34 times. They went to the playoffs that year. In 2010, that number dipped down to 27, and not only did they not make the playoffs, their pass defense was ranked in the lower half in the league. While Carlos Dunlap turned things on half way through the season and gave all Bengals fans hope that he'd be a beast in 2011, the Bengals are still in need of another pass rusher. Sadly, getting another pass rusher may not do much for them in the long run.

According to NFL.com, sacks have become scarcer and scarcer since they were first recorded as stats. In 1982, when quarterbacks dropped back, they were sacked 7.8 percent of the time. That number has gradually decreased to 6.1 percent in 2010. And, for your viewing enjoyment, you can see what I've just made you read. 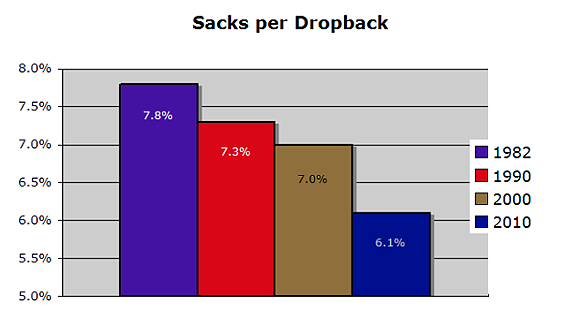 Maybe it's because wide receivers have gotten better at getting open or maybe it's because quarterbacks are better at getting rid of the ball faster, or maybe it's just the fact that offensive linemen have gradually gotten bigger, stronger and faster. Whatever it is, sacks have done exactly the opposite of what many of us would expect them to do, especially since defensive coordinators seem to send massive pressure at quarterbacks more often than not.

The bigger question is whether or not the drop in sacks makes a "sack artist" like Da'Quan Bowers or Robert Quinn worthy of a high draft pick. If teams aren't going to be able to make it to the quarterback regardless of who is doing the rushing, is a guy like Bowers worthy of a No. 4 pick (let's forget about the injury stuff for the sake of this argument)? Then again, maybe it's a lack of good pass rushers that has caused the fall in sacks and a guy like Bowers is exactly a team with a high draft pick and a problem getting to the quarterback needs.