The Atlanta Journal Constitution thought that bringing Chad Ochocinco to the Atlanta Falcons was plenty possible, especially considering the receiver's connection with Atlanta's newest quarterbacks coach Bob Bratkowski (We'll give you a seventh round pick just to take him, says Marvin Lewis). How did our friends at The Falcoholic respond to this totally justifiably awesome rumor? 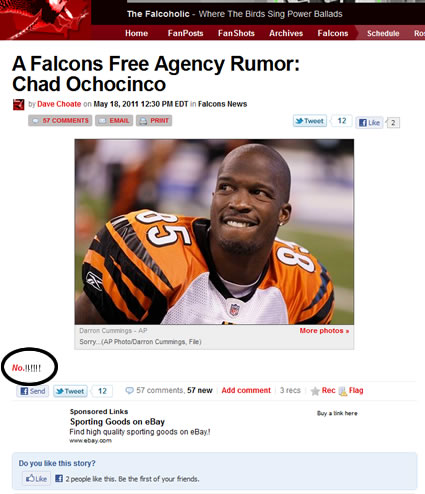 I love 85. I think he gets a bad rap just because he likes to have fun. Yeah, he’s a “diva” but he wants the ball. Part of being a receiver is, well, receiving the ball. If you’re being sent out there to sacrifice yourself play after play to block for someone, sometimes it’s hard to do that.

Another wrote, "We need to keep Chad's johnson out of here!"

Yet that all pales in comparison to NFL Network's Vic Carucci who falls just short of saying that by signing Chad Ochocinco, the Falcons will have a case of leprosy on their hands.

...that's all Ochocinco is at this point of his career: a headache.

It makes no sense to add the massive disruption of Ochocinco's circus sideshow to all of that, even if he does have a good relationship with Falcons quarterbacks coach and former Bengals offensive coordinator Bob Bratkowski. Ochocinco considers Bratkowski an ally, calling him the reason the Bengals drafted him, but that shouldn't be enough to convince Falcons general manager Thomas Dimitroff or coach Mike Smith to take what clearly is a risk if it presents itself.

Poor ol' Chad. Largely an upstanding citizen that once worked very hard in his career, loved to have fun playing the game, isn't viewed as the most team oriented fellow in the NFL. Who could have seen that coming? (5,163,799 Bengals fans raise their hands simultaneously)