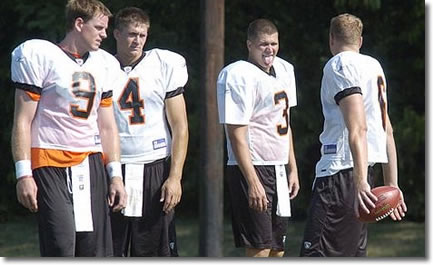 The number three is deeply embedded into sports. Ranging from rules of the game, tactics, strategies to the great personalities in sports. Dale Earnhardt, one of the greatest drivers in NASCAR, sported number three on his car. Baseball greats like Babe Ruth, Harmon Killebrew and Earl Averill wore number three. As did NFL Hall of Famers Bronco Nagurski, Tony Canadeo and Jan Stenerud. But you didn't come here for a lesson on the number three in sports.

Not only is Breech one of the most successful place kickers in Bengals history, he's the team's all-time leading scorer with 1,151 points in his 13-year career in Cincinnati. Breech also holds the franchise mark for most PATs in a career (476) and most field goals (225). Thanks to a powerful offense in the 80s, Breech holds the top four records for most PATs during a season.

Jon Kitna, another that wore number three, might not be as defined in the record books, but he does plenty of significance. He ranks fifth all-time in completions (1,009) 300-yard passing games (5) yards passing (10,707) and touchdowns (59). His 35 completions against the Pittsburgh Steelers on December 30, 2001 is the third-most during a regular season game and his 59.1% completion rate ranks third all-time. But most importantly, Kitna was the stabilizing force for a young Carson Palmer, grooming him, until his departure after the 2005 season.

Your turn. Who is the best Bengals player of all-time to wear number three?