Even though I became a Bengals fan in the late 80s, I was too young to register any memories of those good teams. My early recollections are mostly of those awful teams of the 90s. But one of the things that does very clearly stick out in my memory is a football card I had of Bengals safety David Fulcher. With the combination of his size (6' 3'', about 240) and those gaudy 80s shoulder pads, the guy looked like an absolute monster. He gave me the willies. In fact, I think Fulcher and Freddy Krueger were the two most trauma-inducing figures from my childhood (why, in the name of social services, were my parents letting me watch A Nightmare on Elm Street at that age?).

Fulcher will now get a chance to scare the bejesus out of a whole new generation of kids, as he's been hired as head coach of the Cincinnati Christian varsity football program.

Fulcher, who has served as a defensive backs coach at Lakota West and more recently worked as a mentor at Cincinnati Christian, will replace Nate Johnson, who held the head coaching job the last four years. Fulcher was originally signed on as an assistant coach, but moved into the head position when Johnson stepped down. For his part, Fulcher is looking forward to the opportunity.

The football program has struggled in recent years, but Fulcher said he is not concerned about wins and losses as much as helping to teach his players the "fundamentals of football and life."

During his time with the Bengals from 1986-93, Fulcher got very familiar with the highs and lows of winning and losing. A three-time Pro Bowler, Fulcher was on the last Bengals Super Bowl team in '88, and in 1990 he was on the last winning team the Bengals had until 2005. Known as a bone-crushing tackler, Fulcher was also part of the first zone blitz in NFL history, with Geoff Hobson making the apt comparison that he "was Troy Polamalu before Troy Polamalu and the game changed."

But more memorable for me is that intimidating football card. Now, I couldn't find a picture of the card I was thinking of, but there's this one, which presents about the same idea to an impressionable young mind: 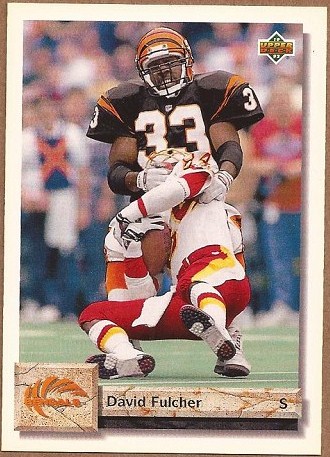 (If that jersey number is 84, then I believe that poor fool getting man-handled here is Redskin great Gary Clark, who has been called "one of the toughest players in Redskin history." Well, I hope so, to get up from that).

As the culmination of his career, Fulcher has received two distinct and prestigious honors: he was named a member of the Bengals.com all-time team and a legend of Nintendo's Tecmo Super Bowl.