Share All sharing options for: Poll: Best Bengals Player To Wear No. 11 All-Time 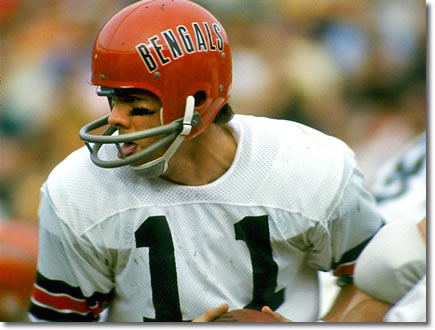 Sixteen players have worn the number 11 in Bengals history. Jordan Shipley, Laveranues Coles, Ryan Fitzpatrick, Doug Johnson, Akili Smith and Lee Johnson are the most recent players to sport the number. None of whom we can consider as the best Bengals player all-time to wear number 11. Seven wore the number for only one season leaving Dale Livingston, Virgil Carter and John Reaves. (note: Jordan Shipley could one day be in consideration)

Livingston, the team's first punter in 1968 and 1969, kicked 140 punts, averaging 41.5 yards/punt in his Bengals career which spanned 24 games when the Bengals were in the AFL. Livingston also took up place kicking duties during the team's inaugural season, converting 13 of 26 kicks and converting only one of seven field goal attempts from 40 yards and beyond.

Quarterback John Reaves spent four seasons with the Bengals, starting six of 28 games as the team's quarterback. From 1975-1978, Reaves posted a 47.8 passer rating, posting 17 interceptions and only seven touchdowns, completing 47.5 of his passes for 1,546 yards passing.

Virgil Carter, who played three seasons with the Bengals, went 12-10 during the 22 games he started. Along with posting a passer rating of 74.9, 22 touchdowns and completing 56.4 percent of his passes, Carter also rushed for 345 yards, scoring four touchdowns including a 73-yarder in 1970.

Then you have Rod Jones, intercepting six passes, recovering one fumble and posting at least 282 tackles as a starting cornerback for the Cincinnati Bengals from 1990-1996.