Share All sharing options for: Poll: Best Bengals Player To Wear No. 18 All-Time 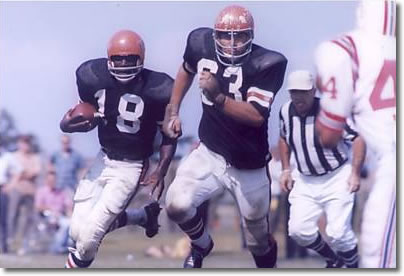 Six players have worn number 18 in franchise history. The four most recent players, Skyler Green (2007), Thomas Bailey (1995), Jim Gallery (1989) and Adrian Been (1987), were limited in their production with the Bengals, in most cases only sticking around for a season. That leaves us with running back Paul Robinson and wide receiver Charlie Joiner.

Robinson, the 82nd overall pick in the 1968 NFL Draft, was a two-time Pro Bowler, a one-time First-Team All-Pro and the 1968 United Press International AFL-AFC Rookie of the Year. During his rookie season, Robinson led the AFL in yards rushing (1,023), yards/game (73.1), rushing touchdowns (8), longest rushing touchdown (87) and attempts (238). Robinson spent four full seasons and part of a fifth season with the Bengals (before he was traded to the Oilers), posting 19 touchdowns with Cincinnati.

Here's where this can get a bit murky. One of our rules is that we examine a players career with the Bengals because there actually was a second player that played for the Bengals that went into the Hall of Fame. Even though he went in as a San Diego Charger, wide receiver Charlie Joiner posted 65 career touchdowns, 750 receptions and 12,146 yards receiving in his career. Yet the rule is what they did with the Bengals (even if they held multiple numbers, ala Jim Breech). With Cincinnati, Joiner posted only 82 receptions over four seasons for 1,463 yards receiving and six touchdowns.

Normally we'd have said Robinson and been done with this number, but we figure we should mention Hall of Fame wide receiver Charlie Joiner as well.