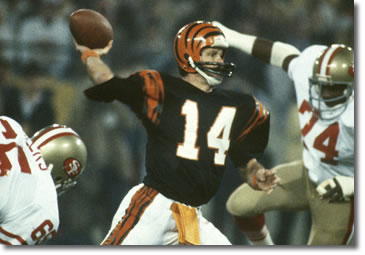 You'd be hard pressed to find Bengals fans that would actively and passionately argue against Ken Anderson's induction into the Pro Football Hall of Fame. Along with being our sixth greatest Bengals draft pick of all-time (we're really kind of just self-promoting ourselves there), we've also wondered if Anderson's number shouldn't be retired. Cold Hard Football Facts wrote a detailed argument that Anderson's omission is an "Injustice in Canton". Former Bengals wide receiver Cris Collinsworth, a teammate of Anderson, wrote:

Go down the statistics, the only reason he is not in the Hall of Fame is that he played for the Bengals who never won a Super Bowl. He should have won Super Bowl XVI, but we let him down. He played a great game. He was the MVP of the league that year after getting benched in the first game of the season. Many quarterbacks are in the Hall of Fame because of the greatness of their teams, which is fine. But, when somebody puts up the numbers that Kenny put up, he should not be denied because he played for a lesser team.

Anderson is now eligible through the Seniors Committee for enshrinement in 2012. And a Bengals fan named David Kubicki is helping push the movement to get Anderson inducted.

...it horrified Kubicki so much that it inspired him to debunk all the naysayers in one exhaustive, colorful, riveting package that he's now sending to the committee in time for their votes in June. With the help of his computer-savvy daughter, Kubicki has given Anderson's 16-year career that careened through crisis and triumph coherence and theme.

He has unearthed Anderson's biography on 13 x 19 photographic paper on what he calls slides that are filled with numbers, photos and anecdotes. It is how the '60s Midwest kid next door came to sit next to the game's greats in a statistical buffet of the '70s and '80s using 21st century visuals.

"My yards-per-attempt were the same as Dan Marino's," he said. "I don't think anyone would think that. "The misnomer in our offense was it was a dink-and-dunk offense,'' Anderson said. "Not so. You had to be able to throw it deep.''

Peter King, a Hall of Fame voter, suggests that he's open to the idea -- not that he has a vote in the senior committee -- comparing Anderson's accolades to that of Dan Marino.

Neither won a Super Bowl. Both played in one. Both lost to Joe Montana. Each was two games below .500 as a post-season quarterback. I'm not saying Anderson belongs in the same breath with Marino. Of course he doesn't. Marino did it better, and for longer, and had to carry a franchise on his back for most of 17 years. But what Anderson did for 16 years in Cincinnati is rightfully getting some attention today -- as in Hall of Fame consideration kind of attention. I'm not saying he belongs -- I've always thought of him as a Hall of Very Good member -- but I have to say I'm open to the argument. This being the biggest reason: Ken Anderson was scouted and hand-picked by Paul Brown and his offensive assistant, Bill Walsh, and when Anderson got drafted, he was trained in the same basic offense Joe Montana would be trained in less than a generation later by the same coach, Walsh.