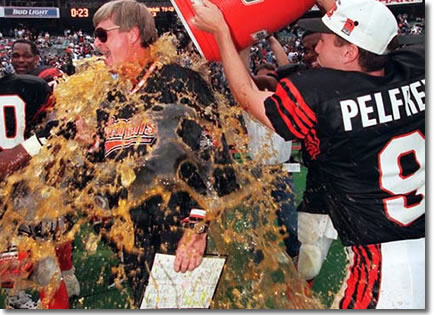 Largely inspired by our Bud Light sponsored draft busts and success series that ran for two weeks leading up to the 2011 NFL Draft, we wanted to experiment on a way that allows us to work in more Bengals history to the greatest collection of Bengals fans on the internet. So we're working on a way of doing that. Originally we wanted to do a "This Day In Bengals History", listing everything that happened on a certain date. Then we realized this time of year really won't provide much information (at least of interest) -- generally speaking, early May isn't an active month for news in franchise history. For the time being, we'll do a post once every few days that references dates around the day we're posting. Such as a few days before and after today. Another idea is to do a This Week In History, but we'll see how this goes first. We hope you like it.

"I'm not going to put up with this anymore," Coslet said angrily. "I'm tired of it. It's not fair to me, and it sure isn't fair to their teammates."

The 1998 Bengals would finish 3-13, followed up with seasons of 4-12 and 0-3 before Coslet finally resigned the Monday after losing 37-0 against the Baltimore Ravens. While head coach with the Bengals in 1998, Coslet's Bengals were shutout twice, outscored 74-7.

+ What's that smell, Mike? On May 4, 1993, the Bengals decided to keep using their Spinney Field practice facility, even after a study found that the "neighborhood's air has high levels of benzene, an industrial solvent."

+ A college dormitory refrigerator. Comparisons were being made with 265 pound running back Larry Kinnebrew and William "The Refrigerator" Perry. Bengals guard Max Montoya said on May 3, 1986:

"Perry's a real big dude," he said. "He's a 22-cubic foot refrigerator. Larry is a little smaller. He's more like one of those refrigerators you find in a college dormitory."

Kinnebrew played five seasons with the Bengals, setting a franchise record for most touchdowns (4) in a game on October 28, 1984, against the Houston Oilers -- Corey Dillon eventually tied the record on December 4, 1997 against the same franchise after moving to Tennessee. Kinnebrew finished his Bengals career rushing for 2,582 yards and scoring 37 rushing touchdowns, tied for fourth most in franchise history.

On November 12, 1992, Kinnebrew was charged with "two counts" for allegedly raping a woman, who claimed he was "intoxicated" and assaulted her. The former Bengals running back claimed it was consensual. In June of 1993, the first trial ended without the jury reaching a verdict. On August 31, 1993, rape charges against Kinnebrew were dropped because judge declared a mistrial because another jury during his second trial was deadlocked.

+ Can't a man just drink and drive in peace? When asked about his DUI on March 3, Bengals running back Corey Dillon was asked about it on May 3, 1998.

"Whatever goes on in the offseason in Seattle is basically my business, but the media tends to make it theirs," Dillon said. "But I'm going to put it like this: I ain't been convicted of no crime and that's where I'm going to leave it."

+ Twice Turk Schonert shows up at CincyJungle. The Bengals released backup quarterback Turk Schonert around in early May of 1990 and Bengals head coach Sam Wyche was "irked" because he was bypassed on the team's decision.

If you remember Turk Schonert's name, then you've either been a Bengals fan for a long time, or you remember us bringing up his name in our best Bengals draft picks series talking about #6, Ken Anderson. Here's that snippet.

During the first game of the year, Anderson posted two first half interceptions against the Seattle Seahawks, forcing head coach Forrest Gregg to bench the quarterback in favor of third-string quarterback Turk Schonert at half-time with Cincinnati facing a 10-21 deficit. Largely thanks to Pete Johnson and Archie Griffin scoring two fourth quarter touchdowns, Schonert led the Bengals to a nice comeback win, beating the Seahawks 27-21.