Commentary: The Bengals Should Start Dalton in 2011

Share All sharing options for: Commentary: The Bengals Should Start Dalton in 2011

With all the constant speculation about which veteran quarterbacks will play for which team, Rex Grossman to the Redskins, Tarvaris Jackson to the Seahawks, and so on, we should remember that this is nothing but speculation. Because of the current lockout, teams are unable to talk to the veteran free agent quarterbacks that they may be interested in. So, regardless of who says what about which quarterback, nobody can really predict, with any real degree of accuracy, what is going to happen. It's going to be just like the draft. Of all the expert mock drafts, not one of them predicted that Christian Ponder would be selected in the first round by the Minnesota Vikings.

We've speculated about different veteran free agents coming to Cincinnati to start in place of Dalton to create a situation similar to the one that Carson Palmer came into when he was drafted by the Bengals, sitting for a year behind Jon Kitna. Most believe that a rookie quarterback shouldn't take the snaps for a team their first year. We've watched young quarterbacks, like Alex Smith and Jimmy Clausen, struggle as starters and we've even seen it ruin other rookie quarterbacks that had the potential to be good, like Joey Harrington and David Carr, who are nothing more than backups now.

Of course, there are exceptions. Peyton Manning started his rookie season, as did Dan Marino, Bob Griese, and more recently Sam Bradford and Matthew Stafford. Manning, Marino and Griese were obvious exceptions to the rule because of how good they are/were, but Bradford and Stafford started for losing teams and they are both obviously just going to get better and be more successful.

The Bengals have had a pretty stringent policy on starting rookie quarterbacks. The last time they did it was in 1969 when they started former University of Cincinnati Bearcat Greg Cook. Cook had the potential to be one of the greatest quarterbacks in the NFL but his career was cut drastically short by injuries. Now the Bengals are faced with the possibility of starting a rookie quarterback for the first time in over 40 years.

I'm here to say they should go for it.

No, this does not mean they shouldn't sign a free agent quarterback with some experience, because they definitely should. Even though I think Dalton should start, I don't think it would be wise for the Bengals to go into the 2011 season with three quarterbacks that share 15 passing attempts (all Jordan Palmer's) worth of experience. The free agent that they sign should be signed to be a backup and the Bengals should cut either little Palmer or Dan LeFevour and move on with Dalton as their starter.

For a rookie at any other position other than quarterback, the best way to learn how to be a pro is to play on Sundays and not against the practice team. The National Football Post's Matt Bowen sums it up pretty well.

I have always believed that rookies need to play. The only way to get the experience of pro football is on the field. Meetings, practice, etc. are all a part of the transition to the NFL. I understand that. Get on the practice field, work with your position coach and continue to drill everything: from your footwork to the playbook.

That is part of a rookie’s development.

But to truly get the most out of any rookie you have to get them on the field—against the top competition. And that means working on Sundays in the regular season.

Andy Dalton will be facing some of the toughest defenses that the NFL has to offer in the AFC North. Their schemes are complicated and their ranks are filled with future hall of famers like Ray Lewis, Ed Reed and Troy Polamalu. Dalton will not get adequate practice against the likes of the Ravens and Steelers while playing against the Bengals' practice defense or looking at a playbook. The only way to learn how not to get burnt will be to get thrown directly in the fire.

In an effort to find only the articles that I could use to back up my theory so you will agree with me, I stumbled upon this gem, that states, in a scientific way, that quarterbacks who started more games in their rookie seasons tend to be more successful in the long run.

I looked at first and second round QBs drafted between 1980 and 2004. I chose 1980 because it is roughly the dawn of the modern NFL passing rules. I chose 2004 to allow at least four years to asses each QB’s performance. Data are from Pro-Football-Reference.com. To measure career success, I used Adjusted Yards per Attempt (Adj YPA). This is passing yards minus 45 yards for every interception, per pass attempt. For QBs with very low pass attempts and spurious Adj YPA stats, I replaced their actual Adj YPA with 3.0 YPA, generally the floor for QBs with a reasonable sample size of attempts. (There is no reason to expect 1989 Chief’s 2nd-round pick Mike Elkins to lose 20 yards for every pass based on only 2 attempts.)

The first step is to account for potential using overall draft pick number. The graph below plots career Adj YPA by pick number. The scatterplot is pretty random for any individual QB, but as a whole there is a predictable trend. Top draft picks tend to end up as NFL top passers. I estimated the expected Adj YPA based on pick number. A QB from the top of the first round would be expected to average 5.0 Adj YPA, while a QB from the bottom of the second round would be expected to average 4.1 Adj YPA. 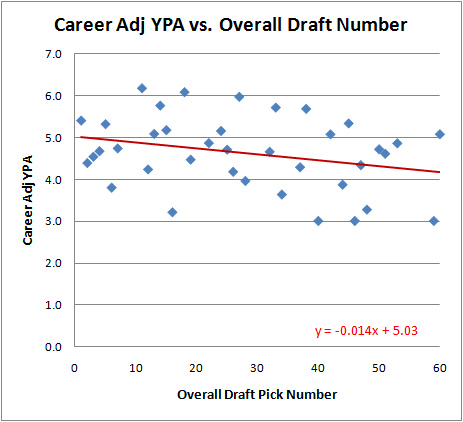 The next thing that the Brian Burke at Advanced NFL Stats did was to compare the passing stats of those quarterbacks that had more starts as rookies to the ones who sat their rookie seasons. They found that quarterbacks who had more starts in their rookie seasons tended to have more success throughout their careers, which is represented in this chart. 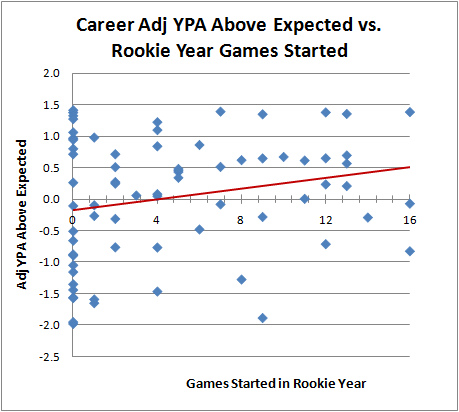 Here, the red line indicates the steady incline of career passing stats of those quarterbacks that started more in their rookie season than those that didn't.

Of course there are exceptions and outliers to each of these graphs, but that doesn't change the fact that, in general, rookies who start early at the quarterback position tend to have more success in the long run.

Because of this data and because of the confidence that both Marvin Lewis and Jay Gruden have instilled in Andy Dalton's chances of being successful in the Bengals' new west coast system, I believe that their best option would be to start Andy Dalton in the first game of the 2011 NFL Season against the Browns on Sept. 11.

They should sign a free agent quarterback for the sole purpose of having somebody with experience on the depth chart to serve as a backup and mentor to Dalton.

Dalton may not have the most successful 2011 campaign if he starts, but I believe, if he is the quarterback of the future, that starting him throughout his rookie season will be the best thing for his future and the future of the Bengals.

Finally, here's a chart to help illustrate the point:

What do you think?