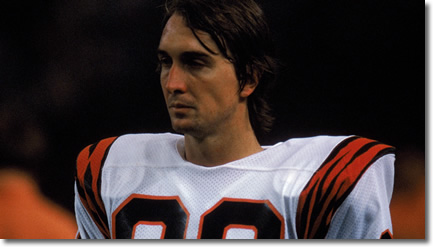 The Bengals desperately needed help in the passing game for a team that finished 6-10 during the 1980 season. Ken Anderson, who posted six touchdowns and 13 interceptions that season, had Isaac Curtis, true. But he also had guys like Don Bass, Dan Ross and running backs Charles Alexander and Archie Griffin leading the team in receptions. As a result the Bengals ranked 21st in the passing game out of 28 NFL teams.

So it was understandable that the Bengals selected a wide receiver in the first two rounds during the 1980 NFL Draft. The first, David Verser out of Kansas, never amounted to anything, catching 23 passes during his four-year Cincinnati Bengals career. The receiver drafted in the second round, Cris Collinsworth, would go on to become one of the franchise's best all-time receivers.

And for his part, he's remained a loyal fan of the Bengals, often attending games before his post-football career took off as a studio host and, later, calling games on Sundays. He provides his input more on the Bengals than any team in the NFL, saying A.J. Green was a good pick and that Andy Dalton could be come the next Ken Anderson. And he still lives in the area, even taking up a job as the wide receivers coach for Highlands High School.

"Mike's a businessman, and I think Mike Brown is probably the guy that is holding up the idea that Carson Palmer is going to be traded -- A) he doesn't like somebody to dictate terms to him in the way that Carson has done it," said Collinsworth.

"But now with the drafting of a quarterback, I think that Mike will get what he can for Carson Palmer, and I do think there's going to be some interest."

It wouldn't surprise us if Brown forces Palmer to retire by not trading the quarterback. Regardless, no trades can be made right now and it's probably wise to keep most of these decisions close to the vest until the new league year begins. And at the end of the day, Collinsworth is probably right.