Share All sharing options for: Bengals Then and Now: DE Ken Johnson

At 6' 6'', about 240, Ken Johnson is an imposing figure, particularly in contrast to the crowds of captivated grade school students who crane up their necks to hear his inspiring words. Staring down at about 3,000 faces a week across different schools, Johnson, a motivational speaker for the organization Sportsworld, likes to unfold the story of his life to these children in order to illustrate a point. As the groups of enraptured faces peer up to listen to him relate his experiences as a former professional athlete, Johnson preaches a message of perseverance and making good choices, telling students: "Every one of you here has gifts and talents that you don’t realize you have [...] Students don’t you ever, ever, ever, ever quit."

That's a lesson that Johnson, who played defensive end for the Bengals from 1971-77, has learned time and again.

Ralph Kenneth Johnson had a rather tortuous path to the NFL from his birthplace of Anderson, Indiana. As he tells it, Johnson had to repeat the fifth grade and was cut from both his junior high school basketball and football teams. Learning his first major lesson about the value of determination, Johnson went on to shape himself into a standout high school player in both sports, becoming all-state and then all-American in each while attending Anderson High School. But Johnson's true passion was basketball, only playing on the gridiron at the insistence of a coach. During a speaking engagement last year, Johnson laughingly explained the irony:

"My dream was to play in the NBA [...] I thought I'd never play football again, but little did I know six years later I'd be playing in the NFL."

After his success at Anderson, Johnson went on to attend Indiana University, where he again excelled in basketball. As the Hoosiers' center, Johnson was voted team MVP in his junior and senior years and chosen as an All-Big Ten player. 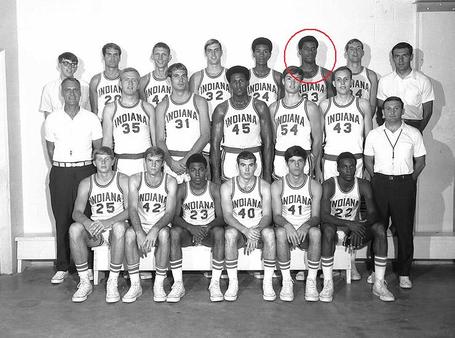 But despite these superlative accomplishments, by his senior season his athletic and academic performance had already begun to slide when he became involved in drugs and alcohol, which ultimately derailed his basketball career. Johnson was drafted by the Cleveland Cavaliers as the 9th pick in the 10th round of 1970 draft, but his troubles off the court negated that opportunity. And that's when the biggest turn in Johnson's life came about.

Although he never played any college football, his basketball coach at Indiana (Bob Knight, former Ohio State Buckeye point guard and notorious chair tosser), recommended him to the Dallas Cowboys. Against the incredible odds of a walk-on tryout, Johnson was eventually signed in 1971 by the Cowboys, who were impressed by his combination of size and his 40-yard dash time of 4.8. As Johnson told The Herald Bulletin later in life: "That was a true beginning for me [...] From total disappointment my life started to finally turn around."

But the Cowboys misguidedly tried to make him into an offensive lineman. While he made some strides in his transition back into football, Johnson was unable to beat out the competition for a roster spot and was put on waivers by Dallas in the preseason. That's when the Bengals, who had already been scouting him, nabbed Johnson and repackaged him as a defensive lineman. 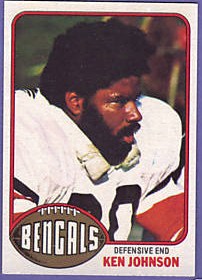 While I can't claim to have any first-hand knowledge of Ken Johnson as a player, he strikes me as being similar to a guy on the current Bengals roster: DE/LB Michael Johnson. Like Ken, Michael is big (6' 7'', 268), with long arms and surprising speed for his size (Michael was also a standout basketball player in high school). I imagine Ken Johnson's scouting report in '71 would have looked a lot like Michael's in 2009, although Ken would have likely graded with a higher motor and more competitiveness. 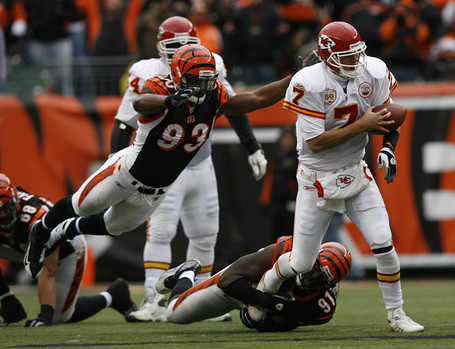 And like Michael, who's part of the team's current rejiggering as a member of the Fisher Price Package, Ken Johnson became a Bengal at a really interesting time in the team's development. In only it's fourth season as a franchise and second as a member of the NFL, the Bengals were still guided by Paul Brown, had a rookie quarterback named Ken Anderson (who may end up in the Hall of Fame), and were part of the NFL's transition into becoming the most popular sport in America. Unfortunately, that '71 team, for which Johnson served as a backup and spot starter, had some problems, finishing 4-10 and at one point playing their punter, Dave Lewis, as a quarterback. Here's a look at that team in action:

But the fortunes of both the Bengals and Johnson picked up. In '73, Paul Brown led the team to an 8-6 record while Johnson began making more of an impression on the field. The ensuing season the team went 10-4, losing to the Dolphins in the first round of the playoffs. Then in 1974, at the age of 27, Johnson slid into a starting role at left defensive end (his only recorded stat for that season is a fumble recovery because the NFL didn't start recording sacks by defensive players until 1982 or tackles until 2001). Often undersized in comparison to the offensive lineman he was up against, Johnson won out with his faith that "[o]ne of the keys to be successful is to persevere," a message he now shares with kids during his school visits:

Johnson told students a story about overcoming challenges, winning over much larger opponents, and, sometimes, failing against smaller opponents.

Bob "The Boomer" Brown, he recalled, was the 280-pound opponent he faced early in his NFL career. Brown was an offensive lineman with the then-Los Angeles Rams and the Oakland Raiders, who intimidated most he encountered.

The smaller Johnson said he surprised himself to learn that he was able to compete toe-to-toe against the offensive lineman, who is now a professional football hall of famer. Meeting that challenge, he noted, only came from overcoming others.

Johnson remained a starter in '75, playing in every game as the team went 11-3, losing to the Raiders in the playoffs. 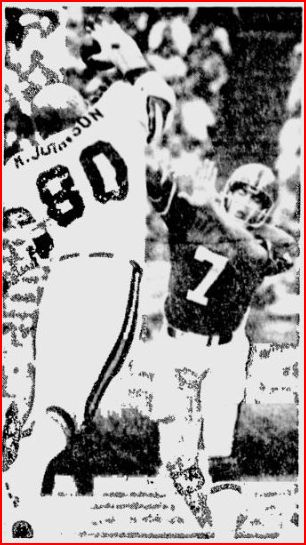 Things changed after the '75 season though. Paul Brown retired as head coach, and new coach Bill "Tiger" Johnson implemented a different defensive scheme. The team also traded wide receiver Charlie Joyner to the Chargers for Pro Bowl DE Coy Bacon. Part of the fallout of that trade was that Johnson, after two years as the starting LDE, found his playing time severely reduced. Bacon went on to (unofficially) record 21.5 sacks for the Bengals that season (although some, including Bacon himself, have claimed it's actually 26, which would be the NFL single season record) and made the '76 Pro Bowl. During the offseason, Johnson, talking to the Anderson Herald, tried to remain upbeat about the situation:

"Sure I was disappointed, but you live and learn," he said. "Last year was just a point in my life where I didn't get to play as much as I would have liked to. Still, I learned some things [...] That's all behind me because the season's over. The 1977 season is what I'm looking forward to. In 1977 I'm going to do my best and maybe things will work out for me."

That 1977 season proved to be the last in a Bengal uniform for both Bacon and Johnson. After grumbling about the organization and the coaches, Bacon was shipped off to the Redskins, while Johnson, having injured his knee in a game against the Dolphins, chose to retire at age 30 (as he likes to point out, among players the NFL is an acronym for "Not For Long"). It was during this time that Johnson, after prompting by a teammate, renewed his commitment to the Christian faith which his parents had instilled in him during his childhood.

Johnson's belief in perseverance was again tested after his retirement, when his sister-in-law was killed by a drunk driver and he nearly died himself when his custom van was hit by a train. Although his vehicle was dragged for more than 100 yards by the train, Johnson miraculously survived, suffering only minimal injuries. But these events, along with the reaffirmation of his religious faith, shaped the direction of his life after the NFL.

Johnson is currently an assistant pastor at the Greater Atlanta Healing Temple, which he has been involved with for 20 years, as well being a speaker for the Indianapolis-based Sportsworld Outreach Ministries, established in 1978. A nonprofit organization dedicated to sending former NFL players out into school communities across the country to bring a positive message of hope, Sportsworld provides its speakers free of charge, relying on the generosity of individuals and businesses for funding. The organization's goal is to help students make positive choices, set positive goals, and take responsibility for their actions, with the former athletes reminding students that "You're Not Born a Winner, You're Not Born a Loser – You're Born a CHOOSER!"

Interestingly, the Bengals have some other ties with Sportsworld. Ricardo McDonald, who played for the Bengals from 92-96 before logging two season with the Bears (and has a twin brother, Devon, who played four seasons for the Colts and Cardinals) is also a speaker for Sportsworld 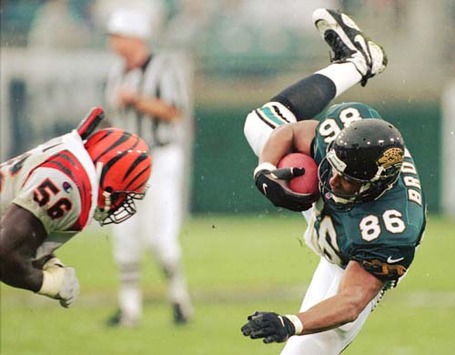 According to this "Where Are They Now?" piece, McDonald is currently a Specialty Account Executive at AstraZeneca Pharmaceuticals and part-owner of a truck stop outside of Pittsburgh. He also had a brief gig in 2008 as a blogger on Sportscity.com (I'd say more, but I didn't bother to read any of his posts) and is involved with a variety of philanthropic projects.

Sportsworld also lists former Bears TE Michael Cobb as one of their representatives -- a million points to you if you're able to recall that Cobb was a first round pick by the Bengals out of Michigan State University in 1977, playing one season for the team without recording a catch.

So it's a small world after all, but a world full of challenges that need to, as Johnson stresses, be met and overcome.

"The key is to tackle life head on," he told the students. "You have to navigate through this mystery -- your journey -- because we're all on a journey. We all have a purpose and it's about trying to discover that purpose. Nobody is here by accident. We're here by divine purpose."

If Marvin Lewis's "get out your shovel" speech has lost its resonance, maybe the Bengals should consider putting Johnson back on the payroll.