Share All sharing options for: Poll: Best Bengals Player To Wear No. 58 All-Time 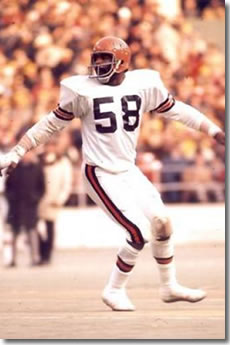 Perhaps because of controversy, we decided to exclude Bengals linebacker Rey Maualuga from our list of best Bengals players to wear No. 58 in franchise history. Why? Simply put, if we included him in a poll along with historical players, he would be selected and we're not sure it would be an honest account. Along with being the most recent player to wear the number, he's really a star on the Bengals defense. And by star, we mean he's a young player that we have huge expectations for, allowing the vote to favor him. However, promise doesn't apply to our mission of listing the best Bengals players to sport jersey numbers in franchise history.

Steve Tovar, a Bengals linebacker from 1993-1997, posted seven interceptions, six forced fumbles, three recoveries while often leading the Bengals in tackles during 73-game (56 starts) career in Cincinnati. Maualuga has yet to surpass Tovar in most statistical categories, leaving him as the promising defensive powerhouse linebacker in the future.

Blair Bush, one of the Bengals first round picks (16th overall) during the 1978 NFL Draft, started 65 games during his five-year career in Cincinnati, was the team's starting center during Super Bowl XVI. Some will argue that Bush was more of a disappointment than a great on the Bengals roster. Maybe. But Bush did play 17 years in the NFL, retiring after playing 246 games with teams like the Seahawks, Packers and Rams.

Maualuga will one day be on this list -- maybe as soon as next year depending on his performance. But until then he remains as the promising linebacker that is currently doing everything right to make himself better as a player and most importantly, a leader.