Question of the Day: Will Chad Ochocinco Be a Hall of Famer?

Share All sharing options for: Question of the Day: Will Chad Ochocinco Be a Hall of Famer?

Yesterday Josh posed the question about whether Terrell Owens is worthy of being enshrined into the NFL Hall of Fame. The resounding reply from y'all is that while T.O. is an uber-douche, his career statistics are redonkulous -- certainly enough to get him into the Hall.

As a pendant to that discussion, I'll ask the question that the man himself raised back in 2007: Will Chad Ochocinco (nee Johnson) make it into the Hall of Fame?

Since he doesn't appear anywhere near retirement (barring alligator-induced amputation), we could consider his a career-in-progress and eschew a discussion of whether Chad is a Hall of Fame candidate right now. But for the sake of argument, let's say he were to suffer a Bo Jackson-esque injury and his stats don't rise much above their current position, would they be enough to get him into Canton without a ticket?

Here are those career stats:

At first blush, those numbers don't seem Hall-worthy. They're very good, but not great. And his career has been decidedly on the downturn the last three years, although his 72 for 1,047 in 2009 is nothing to scoff at. Combine that with the fact that he has played in an era of inflated passing statistics and the Hall's drag on acknowledging wide receivers (there are only three wideouts enshrined whose careers started in the 80s or after) his case seems even more difficult to make. And I don't think anyone is even trying to make that case anyway.

Then again, there's recent Hall of Fame inductee Michael Irvin, whose career totals are pretty much where Chad's are at now:

While those numbers aren't eye-popping compared to some other receivers -- like (eventual inductees) Tim Brown and Cris Carter, who have better totals but failed to ever win a championship -- the hubbub over Irvin is certainly magnified by the fact that he played (well) in 16 playoff games and his Dallas juggernaut won three Super Bowls. That kind of stuff produces an aura that's undeniable, something the Bengals haven't been able to muster. I suppose with Irvin there's also the "what if?" factor, since his career was brought to a premature close due to a spinal cord injury.

On the other hand, Irvin had the benefit of Hall-of-Famer Troy Aikman throwing to him almost exclusively (except in his rookie season when it was some guy named Steve Pelluer), while Chad suffered through three years of Jon Kitna (one of them good), almost a full season of a dreadful Ryan Fitzpatrick, and a little bit of Gus Frerotte, Scott Mitchell, and Akili Smith, mixed in with Carson Palmer, who's certainly a good QB, but no Aikman. Irvin was also aided by having some guy named Emmitt Smith on the team to help open up passing lanes.

Despite that comparison, Chad will still have to add to his resume to gain attention from the selection committee, which he could do. He's only 33. He takes great care of himself (physically anyway) and could conceivably play another 3-5 years. So it really becomes more a question of what his final numbers will look like.

Chad is certainly no T.O. and his career totals won't be as sexy, but I tend to think that in the end they'll be something like Art Monk's, with more TDs:

But like Irvin, Monk has the benefit of three Super Bowl rings. He also gets more consideration for playing in a less pass-oriented era. But even with all that it took Monk a number of years to gain entry into Canton, finally making it 2008.

Of course, whatever further numbers Chad accumulates will depend on where he plays out the remainder of his career: Is he going to be the third banana in Cincy to A. J. Green and Shipley/Gresham? Or will he hold on to a #1 status in Chicago?

Ultimately, Chad might end up in Hall of Fame limbo with Jimmy Smith. Remember Jimmy Smith? It's easy to forget about that dude. In case you have, here's what he looked like: 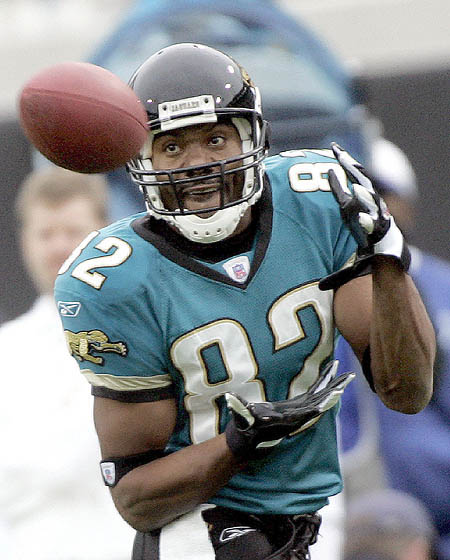 Smith was that guy that would always be hanging out there in the last rounds of your fantasy draft that someone would pick up as an afterthought and then be surprised when he put up 70 catches for 1,100 yards. At his retirement he was seventh all-time in career catches (862), more than any Hall of Fame receiver besides Monk and Jerry Rice. Smith was a preliminary candidate this year (his second year of eligibility) but didn't make it to the semifinals of the selection process.

The biggest obstacle to Jimmy Smith's candidacy is that, to those who didn't play against him, he had almost no swag as a player. He wasn't flashy, and he also played in the relatively small market of Jacksonville. The only real headlines he made were his four game suspension by the NFL in 2003 for substance-abuse and his arrested for drug possession after his retirement. Smith may eventually make it in; or he may remain a borderline case, which could be the fate of Ochocinco.

But what Chad has going for him that Smith didn't is name recognition. As Paul Daugherty put it yesterday, Chad has transcended being simply a colorful football player and transformed himself into a brand.

You could argue Chad’s being smart. He’s setting up his post-football life. He is ahead of the marketing curve, what with his million-plus Twitter followers and his blithe willingness to try anything and everything. He’s a Brand now. These days, that’s quite significant.

Maybe Chad's that song that's been stuck in your head so long it starts to become nauseating, but he's certainly found a way to raise his profile. And, as Daughtery suggests, that's significant. And when voters look at their H.O.F. ballots they may be humming the same tune. Like Irvin (the self-titled "Playmaker" and current broadcaster/actor/snazzy dresser/loudmouth), Chad is a memorable personality, a trait that supplements his actual statistics. Whatever you think of Chad now, it's hard to deny that he's brought showmanship and entertainment value to the game over the years, all of which could go a long way to boost his candidacy for football immortality.

Of course, it may all come back to the numbers, as Daughtery points out:

I like Chad. He is impossible to dislike. I’d like to see him get back to what he does best. Which, to all you kid-Tweeters out there, is playing football. He’s 33. If he worked at it, he could play several more years. Enough, maybe, to merit Hall of Fame consideration. He’s 28th all-time now in receptions, and 27th in receiving yards.

It won’t happen the way he’s playing it now, though. He and his Brand are charting a new course. Smart? Or sad?

And with that, it's time for a rudimentary poll (you're welcome to qualify your response on the message board):