The Bengals drafted von Oelhoffen in the sixth round (162nd pick) of the 1994 NFL draft (the draft headlined by Dan Wilkinson). He played with the team from 1994-97, the first three of those seasons largely as a backup. His best year with the team came in 1999, when he recorded four sacks while starting in five of the 16 games he played in. After that '99 season, von Oelhoffen became an unrestricted free agent. He was courted by a few teams and the Bengals chose to let him walk. Makes sense, right? He was a guy the team felt they really didn't need, so why not let him walk? And when he was signed by the Steelers to a four year, $10 million contract (with a $3 million signing bonus) to be part of their 3-4 front it seemed like the Bengals were smart to save their money, and von Oelhoffen, for his part, was happy with the way it all turned out:

"Pittsburgh has the history, the winning," von Oelhoffen said. "I've always had a lot of respect for them. They have that tough image, and I want to be on the side of that instead of always having to get up to play the Steelers."

At the time it all looked like business as usual, but little did we know that at that moment von Oelhoffen suffered the onset of a dissociative identity disorder (split personality) caused by the trauma of what he perceived to be an abandonment by the team that drafted him and, more specifically, by Mike Brown, whom he had come to identify with as a father figure. It's classic, really. We can see it in the quote above: On the one hand, the familiar von Oelhoffen remains as a baseline personality, the one who displays professionalism in expressing his respect for the Steeler organization. But we can also see another identity bleeding through this rhetoric of civility, the personality (we'll call him Nemo) who feels persecuted by the Bengal organization and harbors a burning desire for vengeance against his former team. It's eerie looking back on this quote now with what we've come to learn about the psyche of von Oelhoffen, for when we read these words we know that what's really being said is "Pittsburgh has the history, the winning...AND I'LL STOP AT NOTHING TO MAKE SURE THE BENGALS NEVER WILL!"

In his years with the Steelers, von Oelhoffen proved to be a good and durable player, missing only one game and recording 20.5 sacks across that span, as well as 143 tackles from 2001-05 (stat not kept in 2000). A native of Hawaii, von Oelhoffen always maintained the appearance of a swell guy that just liked to play football. But of course, this was all part of Nemo's plan. He was simply laying low, waiting for the right time to assert his control and seek his retribution.

In the 2005 wildcard playoff game against the Bengals, Nemo found his opportunity to strike: 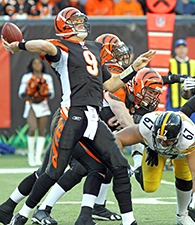 Nemo's scheming was so malevolent that he also convinced Deshea Townsend to take out Chris Henry on the same play (they must have had a signal worked out). It's heinous. Insidious. But it could all have been easily avoided: If the Bengals had simply chosen to re-sign von Oelhoffen, he wouldn't have developed the mental illness that lead to the creation of an alternate personality so hell-bent on destroying the team that he signs with division rival Pittsburgh and waits six years for the perfect opportunity to enact his vengeance during the Bengals' best season in 17 years.

Fortunately, von Oelhoffen is now retired, so Andy Dalton's safe. But if you're a grad student in psychology and need to put together a case study, you can always go visit him at his bar Kimo's, where I hear that every Thursday from 4-8 PM they have their "Broke Knee" happy hour.