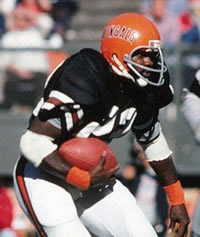 Former Bengals running back David "Deacon" Turner was shot and killed by Kern County Sheriff's deputies outside an east Bakersfiled convenience according to the Bakersfield Californian. Deputies "responded to reports of 10 to 15 juveniles asking adults to purchase alcohol and cigarettes for them" and when deputies arrived, Turner exited the store with "his 19 year-old son, a 16-year-old juvenile and bags of items Turner had just purchased, including alcohol."

Deputies detained Turner and the two teens while they investigated the situation. According to reports, Turner first complied with deputies’ directions but then attempted to leave the area.

When deputies tried to stop Turner from leaving, he fought with them, Sheriff’s reports stated.

During the scuffle Deputy Aaron Nadal, who has worked for the Sheriff’s Department for three years, was reportedly hit in the back of the head with a bag containing two 24-ounce cans of beer.

Deputy Wesley Kraft pulled his weapon and fired twice at Turner, who was struck and "fell to the ground." Turner died two hours later after being rushed to Kern Medical Center.

The shooting is currently under investigation.

Turner played three seasons with the Bengals from 1978-1980, starting seven games and rushing for 549 yards and a rushing touchdown. Turner was also the team's top kickoff return man, recording 1,149 yards in 1979. That same year he returned 55 kickoffs, which was a franchise-best for 26 seasons until Tab Perry posted 64 returns in 2005.