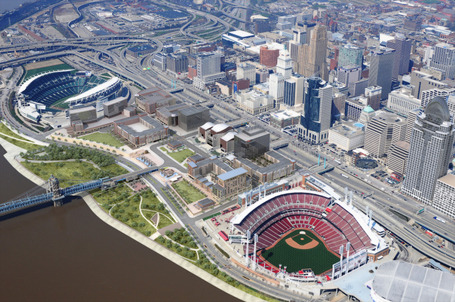 The Wall Street Journal released a report on Tuesday, calling the sweet deal stadium deal that the Cincinnati Bengals have "one of the worst professional sports deals" and relates to how it's impacting Hamilton County. Though we have to admit, the WSJ piece had what appeared to be an antagonistic approach against the Bengals. The truth is, the leaders in Hamilton County are as much, if not more, to blame for approving such a deal. The Bengals are just bellowing with laughter at the mega-sweet deal they received. They're under no obligation to help out; in fact this report came on the same day that Hamilton County Commissioners were expected to approve an upgraded instant replay system... with HD!

The Cincinnati Bengals have finally released their rebuttal through The Who Dey Perspective on Wednesday, calling the WSJ article "gravely flawed and reaches unwarranted conclusions." Bengals Vice President Troy Blackburn sent a letter to the WSJ responding to the story that reads in part:

It is not news that the industrial Midwest has experienced economic challenges for decades. Shifting from heavy industrial manufacturing towards newer economies is never easy, and many communities have worked hard to find productive solutions. Twenty years ago, Cleveland, Ohio undertook an ambitious plan to rebrand its community and revitalize its downtown by making substantial infrastructure improvements, including new sports facilities for the Cavaliers (basketball), Indians (baseball), and Browns (football). This was the “Gateway” program widely touted around the country.

Cincinnati, Ohio followed suit, but did so only after asking its citizens if they wanted new sports facilities for its football (Bengals) and baseball (Reds) teams. Voters approved this measure in 1996, and the community opened an award-winning football stadium in 2000 and a new baseball stadium in 2003. In the 15 years since the deal was put in place, a funny thing happened on the way to the forum: the local government took money intended for the stadia and spent it on other projects. The chief financial officer in the area criticized that as “mission creep”. If municipal spending had remained limited to sports facilities (as originally planned), municipal finances would have fit within the identified tax revenues – even with a down economy, tax receipts have averaged the 2% growth needed to support the financing. Instead, local officials spent money on extra projects—like a new highway project, an urban redevelopment project, and enhanced funding for public schools—and this “mission creep” has caused real economic challenges, which the Journal wrote about Tuesday.

Look. We don't blame the Bengals for the deal that was made. No professional sports team would deny what they signed. True. Sure. It would be nice if they could find ways to help relieve some of the burden county is swamped with. But from their actions, it's not viewed as their responsibility. Either way, county is suffering with a major slash from the funding of the state that's typically the life blood of local governments.